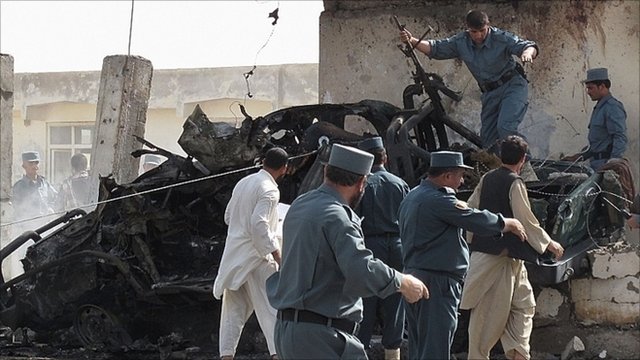 Ten Afghan policemen and a child have been killed in a suicide attack in the southern Afghan city of Lashkar Gah, officials say.

The attacker targeted the gate of the police headquarters in the city, the capital of Helmand province.
The Taliban said it had carried out the attack, which also wounded 12 people.
Responsibility for Lashkar Gah was recently handed to Afghan forces as part of a plan to return all security to local forces by the end of 2014.
High-profile raids
The attack reportedly targeted a joint Afghan police and army patrol at the compound.
Daoud Ahmadi, spokesman for the Helmand provincial governor, said that in addition to those killed nine policemen and three civilians were injured.
Taliban spokesman Qari Yousef Ahmadi told Agence France-Presse news agency the group had carried out the attack.
Helmand remains a flashpoint of the Taliban insurgency and has cost the lives of more foreign troops than any other province.
Lashkar Gah is one of seven initial areas for which security has been handed to Afghan forces as part of the gradual transition of control from the Nato-led Isaf.
Sunday's attack follows a series of high-profile Taliban raids.
Last week an attack by insurgents in the southern Afghan town of Tarin Kowt in Uruzgan province left at least 22 people dead, including BBC reporter Ahmed Omed Khpulwak.
On 27 July, the mayor of Kandahar, Ghulam Haidar Hameedi, was killed in a suicide attack.
Two weeks earlier, President Hamid Karzai's influential half-brother, Ahmad Wali Karzai, was killed in the same city.
Tweet
Pope Shenouda Article