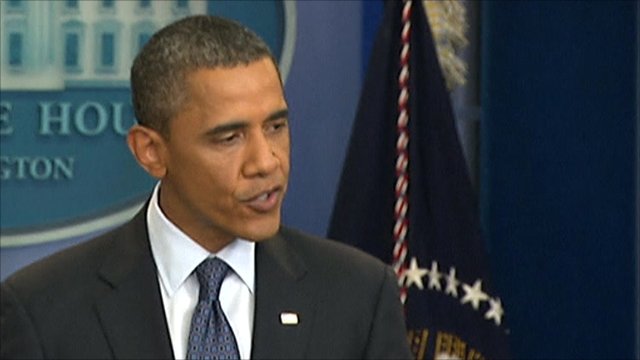 Republican House Speaker John Boehner has walked away from crunch debt ceiling talks at the White House with US President Barack Obama.

Mr Obama said Mr Boehner had rejected an "extraordinarily fair deal" that would have included $650bn (£400bn) of cuts to entitlement programmes.
The president said he had been willing to take "a lot of heat" from his party.
Mr Boehner told a news conference afterwards that Mr Obama had "moved the goal posts" by demanding a tax hike.
President Obama said he wanted a meeting with congressional leaders, including Mr Boehner, at the White House at 1100 (1500 GMT) on Saturday.
'Left at the altar'
The negotiations are aimed at avoiding what analysts say would be an economically catastrophic US debt default on 2 August.
"It is hard to understand why Speaker Boehner would walk away from this kind of deal," President Obama said at a news conference on Friday evening.
"There are a lot of Republicans who are puzzled as to why it couldn't get done."
As well as cutting $650bn from Medicare, Medicaid and other entitlements, the president said he was offering to slash $1tr in discretionary spending, while seeking $1.2tr in revenues, which could have been achieved by raising income tax rates.
In a rebuttal news conference later on Friday evening, Mr Boehner said they had been close to a deal until Mr Obama had demanded $400bn in tax increases on top of about $800bn in revenues that would have been reaped through a comprehensive rewrite of the tax code.
"Dealing with the White House is like dealing with a bowl of Jell-O," Mr Boehner said.
He told reporters he did not think his relationship with Mr Obama had been "irreparably damaged", and that he would attend Saturday's meeting.
White House correspondents said Mr Obama looked visibly angry as he told reporters he, too, thought a deal had been close until Mr Boehner did not return a phone call made by the president earlier on Friday.
"I've been left at the altar now a couple of times," Mr Obama said of the talks with Mr Boehner.
For the first time, Mr Obama publicly countenanced the possibility of the US not meeting its financial obligations.
"If we default, then we're going to have to make adjustments," he said.
Moments later, the president added he remained confident the $14.3tn limit on US borrowing would be raised by the 2 August deadline.
Mr Obama also said he was "fed up" with political posturing.
'We couldn't connect'
In a letter to the Republican rank and file, Mr Boehner said: "A deal was never reached, and was never really close.
"In the end, we couldn't connect. Not because of different personalities, but because of different visions for our country."
He wrote: "I have decided to end discussions with the White House and begin conversations with the leaders of the Senate in an effort to find a path forward."
With the clock ticking down toward a national default after weeks of deadlocked negotiations, former Treasury Secretary Henry Paulson, a Republican, told reporters on Friday that inaction would result in dire consequences.
"Failing to raise the debt ceiling would do irreparable harm to our credit standing, would undermine our ability to lead on global economic issues and would damage our economy," he said.
Meanwhile, the Democratic-led US Senate rejected a "cut, cap and balance" bill passed by the Republican-led House, which would have severely cut public spending and forced the government to balance its budget.
Republicans have been unwilling to consider raising new taxes to counter the growing budget deficits.
The Democrats have been opposed to cutting popular healthcare and welfare programmes for pensioners and the poor.
Tweet
Pope Shenouda Article