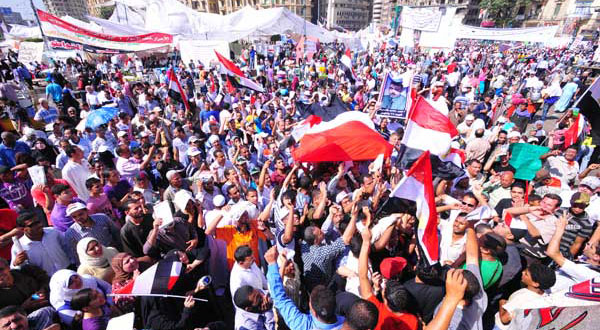 CAIRO: Thousands of protesters rallied in Tahrir Square Friday dubbed "The Friday of Final Warning," to reiterate the demands of the revolution, ahead of an immanent cabinet reshuffle.

After Friday prayers, protesters collectively chanted "Allah is great," "the Military Council is illegitimate," and "Down with Tantawi," referring to the head of the Supreme Council of Armed Forces (SCAF), Field Marshal Mohamed Hussein Tantawi.
The protesters, whose numbers dramatically increased to tens of thousands in the evening, expressed their demands through poetry, song, caricatures and graffiti reminiscent of the 18-day uprising that toppled ex-president Hosni Mubarak on Feb. 11.
One of the demands was to transfer the ousted President from Sharm El-Sheikh International Hospital, where he is detained pending trial in August, to Tora prison hospital. He is being tried for the killing and injuring of peaceful protesters during the uprising.
The protesters also called for cleansing state institutions from ousted regime figures, especially the Ministry of Interior, the judiciary and the media; swift trials of those accused of killing protesters during the uprising and corrupt regime figures; an end to military trials for civilians and setting reasonable minimum and maximum wages.
Thousands marched later afternoon from the iconic Square to the High Court building demanding “the fall of the prosecutor general” and cleansing the judiciary, before returning to Tahrir.
In Tahrir, Layali, 20, stood among several caricatures sarcastically expressing her demands.
"Everyone who looks at these pictures will know what we want, without asking us too many questions," she told Daily News Egypt.
The pictures portrayed SCAF Generals and said "we don't want you," demanding that they hand over power to a presidential council.
One of the protesters went on stage at one point and called on the protesters to close off the Mugamma building (a government administrative complex) starting Sunday, to prepare for wider civil disobedience.
However, other protesters booed him down and chanted "No…we want it peaceful." Then the chants followed, "whoever loves Egypt, won't vandalize it," and "Yes for the sit-in, no for obstructing [the people's interests]."
The Mugamma building was shut down for a couple of days by protesters earlier this week. The majority of the protesters in Tahrir Square said they were against closing the Mugamma and obstructing peoples’ interests.
The protesters included people from Alexandria, Suez and Upper Egypt, with representatives of different governorates joining throughout the day.
One corner of the square included camps identified as the camps belonging to "the coalition of the sons of Upper Egypt", who have been holding an open sit-in in the square since June 30.
"We want to prove that the sons of Upper Egypt exist in Tahrir Square," engineer Sherif Zaki from Qena told DNE.
The protesters called on Prime Minister Essam Sharaf to resign and return to Tahrir Square because he failed to execute their demands.
"He swore to us here in Tahrir when he was first assigned to his post that he would resign if he failed to serve us and execute our demands," Zaki said.
Sharaf had vowed to reshuffle the cabinet earlier this week, and called on the Supreme Judicial Council to hold public trials of members of the former corrupt regime, in response to the people's demands.
The Council has since announced that trials will be held in larger courtrooms and broadcast on large screens outside.
In a statement posted on the premier’s Facebook page on Friday, he said he understood their message of “swift changes and social justice”, noting that the cabinet reshuffle would be merely the start.
However, Zaki described Sharaf's statements as "pain killers" and "tranquilizers" that won't really solve anything.
Abdel Azim, a clothes vendor from Sohag, said that the protesters left the square and gave the military council the opportunity to execute their demands following the revolution.
"But the army failed us," he said.
The protesters also demanded the rights of the martyrs’ families shouting "we want blood for blood."
A total of 530 martyrs’ families were granted LE 1,500 each in exceptional pensions on Wednesday.
The Cabinet added that 1,000 of those injured during the uprising will receive LE 5,000 each if they suffered permanent disability and LE 2,000 for mild injuries.
Amal Mohamed, mother of Ramy Gamal, who was shot dead in the chest in Tahrir Square on Jan. 28 said that money wasn't everything.
"The corrupt figures of the former regime who killed our children must be prosecuted," Mohamed told DNE.
English-language teacher Hend Fouad said "I teach my students about the revolution and its objectives of freedom and justice. What do I tell them when they see that all the corrupt figures of the former regime are being protected and spared by the army," she asked.
Fouad accused the media of intimidating people from joining Tahrir Square protesters by portraying an image of them as "thugs", adding that she always felt very safe and liberated in Tahrir.
"I am protected by thousands of bothers and sisters here…they're all my family," she said.
Kamel Omar, 57, was at the square with his four- year-old grandson, holding a noose.
"The man who degraded all of us and stole our money while we lived in poverty must wear this," he said, referring to the ousted Mubarak.
Saeid El-Hariri, who works for EgyptAir, was in Tahrir with his wife and two daughters.
“Before the revolution, I raised my children to respect Mubarak, but after he stepped down, the amount of corruption that he embedded in this country proved me wrong," he said.
"I love this country and don't want its people to suffer from injustice and tyranny."
Tweet
Pope Shenouda Article