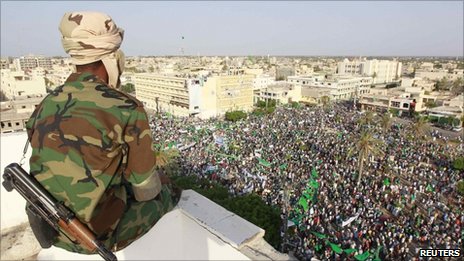 Libyan leader Colonel Muammar Gaddafi has again vowed never to leave Libya, the "land of his ancestors".
His speech was broadcast to supporters in the city of Zawiya, which was taken back from rebels after fierce fighting in the early stages of the revolt.
The remarks came after the US recognised the opposition as Libya's "legitimate governing authority".
Nato air strikes hit Tripoli's outskirts in one of the heaviest nights of bombing for weeks.
Col Gaddafi stressed his intention to remain in power.
"They're asking me to leave," he said. "I will never leave the land of my ancestors or the people who have sacrificed themselves for me."
His speech was broadcast over loudspeakers in Zawiya, a town some 50km (30 miles) west of the capital which was controlled by rebel forces early on in the fighting and only retaken after a bitter battle.
It was the third address by Col Gaddafi in recent days apparently aimed at showing the support he enjoys in towns where his forces are in control.
There was also a rally in Zlitan over the weekend, where up to 40,000 people - some of them bussed in - took over the main square to voice their backing for the colonel.
On Friday, US Secretary of State Hillary Clinton announced that the US no longer regarded him as the legitimate authority, and would recognise the Transnational Council (TNC), joining some 30 countries to do so.
This means billions of dollars of Libyan assets frozen in US banks could be released to the rebels.
Stalemate
Early on Sunday, Tripoli's eastern suburb of Tajoura came under heavy Nato attack.
Plumes of smoke were seen and rumbling blasts were reported to have continued for at least an hour.
Libyan television said civilian and military targets had been hit, adding that there were casualties, but gave no details.
Nato said the target was a military depot which ostensibily stored a fleet of vehicles for the African Union's peacekeeping duties. But surveillance indicated that Col Gaddafi ahd been using the fleet to sustain the war close to Misrata, Nato said.
RAF aircraft from Britain, which took part in the strikes, dropped 17 precision-guided bombs, causing extensive damage to their targets, officials said.
More than 10 rebels were reported to have been killed as they tried to advance on the key oil port of Brega. It was not known if any government forces had been killed.
The conflict in Libya appears to be in a protracted stalemate. Rebels are holding eastern Libya and pockets in the west.
Col Gaddafi remains entrenched in Tripoli, despite the Nato bombing campaign.
International sanctions have also been imposed and international arrest warrants issued against leading figures in the Libyan regime.
Western and Arab members of the Libya Contact Group are drawing up a plan to end hostilities, which will be presented to Col Gaddafi.
Tweet
Pope Shenouda Article