On the long-awaited law 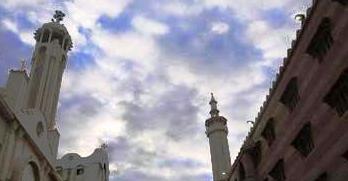 Last Sunday, I wrote my comments on the draft of the unified law for building places of worship, issued by the Justice Ministry which said it had referred to the proposition of the National Council of Human Rights (NCHR) in this respect. During the week, however, the Supreme Council of the Armed Forces issued a draft decree for a unified law governing the regulations and conditions for building places of worship in Egypt. The law decree reads as follows:

The Supreme Council of the Armed Forces
Decree for law number ( ) for the year 2011
For the regulations and conditions for building places of worship
The head of the Supreme Council of the Armed Forces
After referring to the constitutional declaration issued on 13/2/2011,
And the decree for the law No 1 for the year 2011,
And the decision for the law No 42 for the year 1967 regarding the delegation of responsibilities,
And the decision by the president of the Arab republic of Egypt, No 391 for the year 2005,
And the law No 119 for the year 2008 to issue the building law,
And following the approval of the Cabinet,
Has decreed the following law, and has passed it.
Article 1
The governors, each within the boundary of his governorate, are mandated to license the erection, demolition, restoration, renovation, modification, expansion, and fortification of places of worship. The approval of the application for licence is issued after consulting the municipal authority concerned with planning and organisation, according to the building requirements at the time of the licensing. Approval should be issued within the space of three months since the date of submission of the application. The application is automatically approved if no approval is issued before the three-month period expires. The application may not be rejected without an explanation.
Article 2
When issuing licences for building new places of worship, governors should take the following into consideration:
1. The approval of the Ministry of Religious Endowments or the leadership of the religious sect in concern and recognised in the Arab republic of Egypt should be attached to the application for licence.
2. The number of places of worship, for every religion recognised in the Arab Republic of Egypt, in every district or centre inside every governorate should be proportional to the number of inhabitants actually residing in these districts or centres and belonging to the religion in question. This number should fulfil their actual needs to perform their religious rites.
3. The distance between the place of worship required to be licensed and the nearest similar existing one should be no less than 1000 metres.
4. No place of worship should be built on agricultural land except in case of absolute necessity, and only with the approval of the Agriculture and Land Reclamation Ministry and the Cabinet to convert the agricultural land required for building the place of worship into barren land.
5. No place of worship should be built on land the ownership of which is disputed.
6. The land on which the place of worship is to be built should be no less than 1000 square metres in area. A ground floor should be allocated for activities of social service offered by the place of worship, and for the residence of those in charge of executing the religious rites.
7. It is banned to erect places of worship on the ground or lower floors of residential buildings, or atop such buildings; or on the banks of the Nile or canals; or on archaeological or historical sites; or on any site on which building is forbidden by the law number 119 for the year 2008.
Article 3
Every governor in his own governorate is mandated to issue the administrative decisions needed to govern the submission of applications for licence to build, restore, renovate, expand, or rebuild places of worship, and the procedures required to inspect them.
Article 4
Applications for restoration, renovation, expansion, rebuilding, or fortifying places of worship should be submitted by the authority supervising the place of worship or the religious leadership concerned to the administrative authority concerned with organisation and building in every governorate.
Article 5
Without violating any penalty in the penalty law or any other law; anyone who erects, demolishes, modifies, renovates, restores, or expands a place of worship in violation to the provisions of this decree; would be imprisoned for not less than two years and not more than five, and fined a minimum of EGP100,000 and a maximum of EGP300,000.
Article 6
The presidential decree 391 of 2005 is declared null and void, as is any resolution that violates this law decree.
Article 7
This law decree should be printed in the official paper. It has the authority of the law and is effective as of the date it is published.
Field Marshal Hussein Tantawi
Head of the Supreme Council of the Armed Forces
I have a few comments which I hope would be provided for in the bylaws.
• The first remark concerns the course of legalising the status of already-existing places of worship that have no official licence. In my editorial last week I tackled in detail this predicament, and showed how it was the outcome of discriminative practices, and that the status of such places of worship needs to be legalised. Only then can they take advantage of the provisions of the new law where restoration, renovation, expansion, or all the works normally needed by buildings are concerned.
• The second remark concerns the second article in the law, which links the building of places of worship to the number of inhabitants in a given area. This is one condition the implementation of which has to be specified, since the figures of the members of any religious denomination in Egypt have always been shrouded in secrecy and were never publicised. For this condition to be fulfilled, a database has to be provided by the State authorities concerned.
• The third remark concerns the course of claiming against the rejection of applications, even if an explanation for the rejection is given. There exists no civil legislation which does not make provision for citizens to go to court in case they have been treated unfairly. The draft law proposed by the NCHR included such a provision; I hope the new law would take it into consideration.
Tweet
Pope Shenouda Article