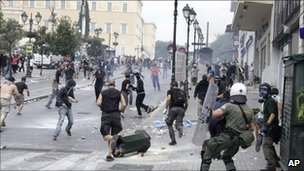 The Greek debt crisis is endangering the economies of at least five other EU countries, the head of the eurozone group of finance ministers has warned.

Luxembourg Prime Minister Jean-Claude Juncker said Germany was "playing with fire" with a plan to involve private creditors in resolving the crisis.
Eurozone finance ministers are set to release a 12bn-euro (£10bn) in loans later on Sunday.
PM George Papandreou has asked parliament to support the new cabinet.
Speaking on Sunday at the start of three days of debates, Mr Papandreou said Greece was given the impression it was divided over the financial reforms, which was not helping its economic situation.
MPs will vote on a confidence motion on Tuesday after Friday's cabinet reshuffle saw former Defence Minister Evangelos Venizelos replacing George Papaconstantinou in the finance ministry.
The move sparked a jump in Greek bank shares but failed to ease the anger on the streets.
Greece needs 12bn-euro IMF and EU loan to avoid defaulting on its debts due for repayment over the next few months.
But the money is conditional on the government implementing a series of painful domestic reforms which have sparked nationwide strikes, rallies and violent riots on the streets of the capital.
German Chancellor Angela Merkel has said that private investors should be encouraged to share some of the burden of the Greek debt by allowing the country extra time to pay them off.
'Wrong signal'
Mrs Merkel and French President Nicolas Sarkozy have stressed such involvement should be voluntary, but that private creditors should "show solidarity".
But Mr Juncker told German paper the Suddeutsche Zeitung on Saturday that this proposal was "playing with fire" as it would send the wrong signal to ratings agencies who could then decide Greece had defaulted on its repayments.
If Greece were to default, the cost of borrowing would rise for other struggling eurozone countries, forcing them to default in turn.
Mr Juncker said that unless properly managed, the crisis "could prove contagious for Portugal and Ireland, and then also for Belgium and Italy because of their high debt burden, even before Spain".
He said Mrs Merkel's proposal was based on "domestic political considerations in Germany".
Finance ministers from eurozone countries are due to meet in Luxembourg later on Sunday, where they will almost certainly release the next 12bn-euro loan which has already been promised to Greece as well as discussing a second bail-out package.
But the BBC Chris Morris in Athens says many people doubt whether that will be enough to save the country's economy.
Thousands of protesters marched on the Greek parliament on Saturday to show their continued anger at Prime Minister George Papandreou's austerity campaign which would see significant cuts to public services and sell off state enterprises.
"They, along with the creditors, have decided to skin the Greek people alive," said Aleka Papariga, head of the Greek Community paryt.
"The struggle will continue until the end."
Tweet
Pope Shenouda Article