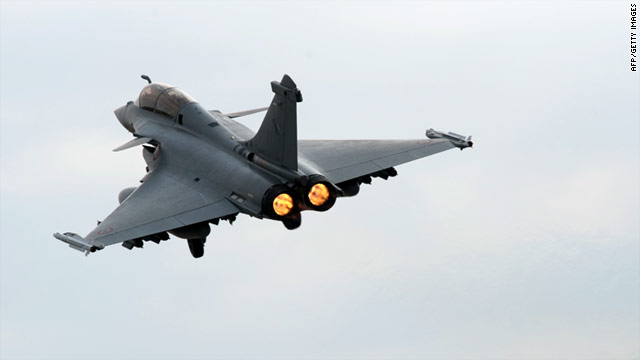 It said the attack in the residential neighborhood of Aradah also injured many others.
"This is cold-blooded murder," government spokesman Musa Ibrahim said at the scene in Tripoli. "Is the the protection of civilians? Is this really the search for peace and democracy in the Libya, to attack peaceful neighborhoods of Tripoli?"
NATO said it was aware of the allegations and looking into them. On Saturday, the alliance denied earlier Libyan claims it was killing civilians and
"The claims made by Gadhafi and members of his regime are outrageous. It is Gadhafi and his regime that have been systematically and brutally attacking the Libyan people," NATO spokeswoman Oana Lungescu in response to Libyan government accusations.
Separately, at least four people were killed and 30 were wounded in fighting in Dafniya, west of Misrata, according to the publicly viewable hospital records at Al-Hikma hospital, which is treating casualties. At least three of the four dead are rebel fighters, according to the hospital.
Bombardments began in the Dafniya area beginning Sunday morning, and they have been continuing on a fairly regular basis since then, CNN heard.
A stream of wounded people flowed into a makeshift hospital in Dafniya, and witnesses reported seeing intense artillery fire coming from both sides of the clashes.
A local radio station in Misrata was calling for people to donate O-positive blood to meet increased demand after the fighting Sunday.
Ibrahim, the Libyan government spokesman, said the government holds NATO, British Prime Minister David Cameron, French President Nicolas Sarkozy and U.S. President Barack Obama "responsible morally and legally for this murder and crimes" for the alleged strike that killed three in Tripoli on Sunday.
State TV reported that the three people killed belonged to the same family. The network broadcast footage of a destroyed building and a chaotic scene of rescue teams and civilians pulling a body from the rubble.
The incident occurred a day after NATO acknowledged that its aircraft had mistakenly struck vehicles aligned with the Libyan opposition in the hotly contested eastern oil city of al-Brega. On Saturday, NATO expressed regret over the incident.
NATO did not provide details as to how many people, if any, died or were injured in the al-Brega strike, which took place on Thursday. But in a statement released Saturday, NATO admitted that its forces hit vehicles that were "part of an opposition patrol" -- an incident the military alliance described as "unfortunate."
For weeks, NATO forces have been targeting forces loyal to Gadhafi in an effort to prevent civilian casualties. Most of those strikes have come from missiles fired from off-shore ships or aircraft flying high above the north African nation, though earlier this month British and French attack helicopters did fly closer to the ground in al-Brega to go after targets in that city more precisely.
Al-Brega is on a frontline -- east of Gadhafi's base in Tripoli and west of the rebels headquarters in Benghazi -- in fighting that has taken place between the two sides over the past several months.
In its statement, NATO said that "a column of military vehicles, including tanks," were spotted Thursday around al-Brega where Gadhafi forces "had recently been operating." During what it called "a particularly complex and fluid battle scenario," leaders in the military alliance ordered a strike after determining these vehicles posed "a threat to civilians."
"We regret any possible loss of life or injuries caused by this unfortunate incident," NATO said in its statement.
Tweet
Pope Shenouda Article