Deadly blasts at market in Pakistani city of Peshawar 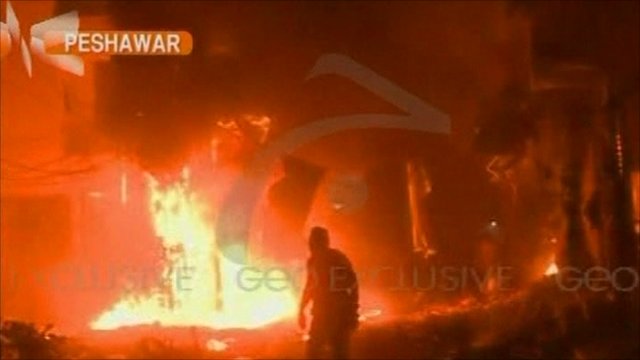 At least 34 people have been killed and 90 wounded after two explosions ripped through a market in the north-western Pakistani city of Peshawar, police say.

The blasts occurred just after midnight in an area of the city that is home to political offices and army housing.
The number of attacks by militants in Pakistan has risen sharply since al-Qaeda leader Osama Bin Laden was killed in a US commando raid last month.
On Thursday, a bombing on the outskirts of Peshawar left four people dead.
An explosive device was planted in a pile of rubbish by the roadside in the Matani area, police said. The victims included a woman and a child.
Remote
A senior police official in Peshawar, Dost Mohammed, told the Associated Press that the first explosion on Sunday had been relatively small, and had drawn rescue workers, police and several journalists to the scene.
Minutes later, a large explosion rocked the area, causing the fatalities and most of the injuries. Eighteen people were said to be in a serious condition in hospital.
Jamal Khan, a 22-year-old student, was in his flat when the first blast happened. He was hit by flying debris by the second blast after rushing downstairs.
"The explosion was so huge I will never forget it all my life," he told AP. "It was deafening, and then there was a cloud of dust and smoke. When the dust settled, I saw people crying for help and body parts scattered everywhere."
Mr Mohammed said initial reports suggested the second blast was caused by explosives hidden in a vehicle and detonated by remote.
However, several police officials later said it might have been carried out by a suicide bomber on a motorbike.
The source of the first explosion is still unknown.
The AFP news agency said the apparent target was a supermarket. But the blasts also occurred close to a building containing the offices of several newspapers and across the road from those of the top political agent to Khyber, a volatile tribal region. There is also housing for soldiers nearby.
Rahimullah Yusfzai, editor of the News International newspaper, told the BBC he was in his office nearby when the blast went off.
He said the area had many shops and restaurants and was popular with families and students.
"First there was a small blast, we thought it was a gas cylinder which had exploded. Many people then ran towards the site of the blast and then the second big explosion took place which was heard far and wide," he said.
"This is how the militants operate - there is, in almost all cases, a smaller blast then a bigger one when the police and the media arrive."
The incident came as Afghan President Hamid Karzai visited the capital, Islamabad, for talks with senior Pakistani officials.
Speaking at a joint news conference, Pakistan's Prime Minister, Yousuf Raza Gilani, said his country would give Afghanistan all the support it could, as Kabul pursued peace talks with the Taliban.
Mr Gilani said Pakistan's only aim was to support the peace process.
Tweet
Pope Shenouda Article