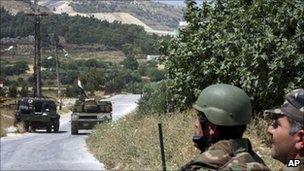 Syrian government forces have advanced into the northern town of Jisr al-Shughour, state media say, as part of a widespread government crackdown.

TV reported heavy fighting with armed groups, two dead and large numbers of arrests, while witnesses reported an attack using tanks and helicopters.
The government says it is trying to restore order after it claimed 120 security personnel had been killed.
Residents say they died after a mutiny and fighting between security forces.
The government advance sent more people fleeing towards the Turkish border, to join thousands who have already crossed.
BBC correspondents on the border say the number of those who have crossed is probably now much higher than the official figure of 4,300 given 24 hours ago.
US officials say Syria's crackdown has created a humanitarian crisis, and called for the International Committee for the Red Cross (ICRC) to be given access to the north.
On the Turkish side two camps are already full of refugees and a third is filling up rapidly.
There is a need for food, tents, blankets and mattresses, but medical supplies are in particularly in demand to cope with large numbers of wounded.
UN refugee agency the UNHCR has praised Turkey's response to the crisis but requested broader access to those in the camps.
The agency says it considers anyone fleeing such a level of persecution to have the legal status of a refugee.
Turkey maintains that the displaced people are not seeking refuge, as their eventual aim is to return home.
Feared militia
Activists and residents say troops bombarded Jisr al-Shughour in the early morning.
They then began to move in from the east and south in a two-pronged attack with 200 military vehicles, they said.
State media said the operation began after explosive devices were defused on the approaches to the town.
"Heavy confrontations are raging between army units and members of armed organisations taking up positions in the surroundings of Jisr al-Shughour and inside it," state TV said, quoted by Reuters news agency.
"Two members of the armed organisations were killed, large numbers of them arrested, and lethal weapons in their possession were seized."
"Tanks came from the south after shelling randomly and sending volleys of machinegun fire all over the town," one resident told the agency.
Helicopter gunships were also seen hovering overhead.
There are reports that the troops are part of an elite unit commanded by President Bashar al-Assad's younger brother Maher.
The BBC's Jim Muir, in neighbouring Beirut, says there are reports of members of the feared Shabiha militia group fighting alongside the soldiers.
It is not clear how much resistance the army is facing in the town, our correspondent adds, with so many people having fled.
"There are only a few people left. I escaped on my motorcycle through dirt tracks in the hills," one man told Reuters.
Syria has prevented most foreign journalists, including those from the BBC, from entering the country, making it difficult to independently verify reports from there.
However, an Associated Press reporter who is has been permitted to travel with Syrian troops said he saw "gunmen" arrested, and at least two dead in the town hospital.
State media said two command groups of armed organisations had been detained, and others killed or wounded. Arms and ammunition were seized.
One account said some of those who tried to flee towards Turkey were intercepted, while others were shot and killed.
On Saturday witnesses described homes being bulldozed in nearby villages and crops and fields burnt and uprooted.
Violence has also been reported in the nearby town of Maarat al-Numan, with armed men attacking the courthouse, police station and strategic fuel depot.
Meanwhile there are continuing but unverifiable reports of army defections, with the latest saying that an officer and 50 men had changed sides rather than fire on civilians in Jisr al-Shughour.
Protests against President Bashar al-Assad began in March and have spread across the country.
Rights groups say hundreds of people have been killed and there are reports the army has been using aircraft to open fire on people.
Tweet
Pope Shenouda Article