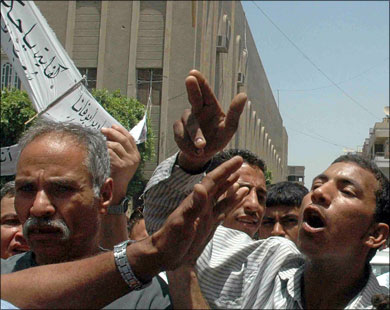 AINA) -- A state of fear has gripped the Christian inhabitants in the Upper Egyptian town of Mallawi after a Muslim mob tried to kill a Christian man for frequenting a Muslim-run brothel. Christian inhabitants are staying indoors, have closed their businesses, and are keeping their children -- especially girls -- away from schools. They fear wide-scale Muslim violence against them, similar to the violence which took place against Christians in Dairout on October 24,2009. (AINA 10-27-2009).

The latest incident in Mallawi was prompted when a Muslim mob learned of the presence of a Coptic man inside a Muslim-run brothel. A group of Muslims broke into the brothel, dragged him to the streets where he was stabbed 16 times. "Acid was thrown on him, before being stabbed. He was taken to Minya General Hospital where his condition is still very critical," said Wagih Yacoub of Middle East Christian Association.

The 23-year-old Copt Mina Emad Shoyeb was taken by the Muslim driver Mohamad to a brothel run by the Muslim widow, Ragaa Mosaad Ismail, together with two Muslim prostitutes, 23-years-old Eyman Ismail Abdelmalik, and 25-years-old Maha Kamel Aly. According to Copts United Mohamed had agreed on a fee of 200 Egyptian Pounds for the services of one of the prostitutes, Maha, but decided later that he wanted to pay only half of that amount, an offer Maha refused. The Copt Mina decided to pay the full fee. Mohamad left the brothel, and enticed the neighborhood Muslims to revenge for their honor for harboring a brothel in their midst, which is frequented by Christians. This prompted Muslims to congregate, break into the brothel and carry out their attack.

Reports coming out of Mallawi said that since yesterday evening, November 10th, several Muslim mobs have been wandering around the town streets, vandalizing and looting property belonging to Christian Copts; State Security forces were called in to contain the situation.

Yacoub also said that business life in Mallawi has come to a stand still and Bishop Dimitrious of the Coptic Orthodox Diocese of Mallawi, Ansena and Ashmonein, advised students in Deir Abu Heness, Deir Barsha and all the areas East of the Nile Delta, to avoid going to school for fear of Muslim repercussions against them.

The Egyptian Newspaper elYom reported there was a conspiracy to entrap the Christian man and then use him as a pretext to attack and loot property owned by Copts, as well building up animosity against them in Mallawi. Copts in Upper Egypt are calling for the resignation of the Governor of Minya, "who has turned Minya into Minyastan." They blame his fanaticism in causing the escalation of attacks and persecution of the Copts in Minya. Governor Dia-uddin was a top State Security official, who has also spent ten years teaching law in a Saudi Arabian university, before taking office in Minya.

In a strongly worded press release addressed to the Minister of Interior, Dr. Naguib Gobrial, President of the Egyptian Union of Human Rights, criticized the state of fear under which the Christian Copts are living, in addition to the vandalism and looting of their property. He criticized the inaction of the Governor of Minya and the failure of the State Security in achieving peace and stability.

Mr. Gobrial reminded the Egyptian government of the February 2010 Universal Periodic Review, and its pending embarrassment in front of the UN Human Rights Council, when it accesses the human rights situation in Egypt, including the religious situation.

Many people turn away from the fear of God and hold to love, without knowing what fear is, what love is, or what the relation between them is! In fact it is good to hold to the love of God, but to reach it we have to start with fear.The fear of God is the beginning of the way, whereas the end of the way is love. So we cannot proceed on the way from its end!