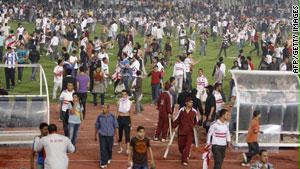 Last weekend saw a very sorry sight at the Cairo Stadium as the game between the Egyptian and Tunisian football teams drew to a close with a tie between the Zamalek Club and the Tunisian Club Africain team. An unbridled mob of Zamalek fans armed with knives and sticks broke into the field and assaulted the referee, his assistant, and members of the Tunisian team. It was an incident that brought shame to all Egyptians.

Just as the 25 January revolution embodied a public outcry against a repressive political climate, the shame felt by the Egyptian public last week should work to spark an outcry against the country’s ugly sports scene. Egyptian sports in general and football in particular have become a source of frustration and chagrin for sports lovers. No longer does the public sports scene have anything to do with fitness, ethics or amusement. Respect, decency and fraternity have given way to the notion that the “ends justify the means”. Intimidation and hooliganism now dominate the behaviour of players, coaches and administrators who are supposed to be role models of tolerance and integrity. And the other side of the coin features fanatic, aggressive fans whose unbridled rampage has brought disgrace upon Egypt.
I have repeatedly written to call for a stance against those who challenge the respect of the State and the rule of law. Now I find it equally important to stress the need to strike with an iron fist against fanatics who trifle with the legendary ethics of sports. With nothing in mind but winning at any cost, they terrify their rivals and damage public property when victory seems some way off. Football fanatics do not appear to realise that fair competition is in itself a value. Neither can they feel that doing the utmost to win is in itself pleasure, regardless of the outcome. In this context, they find it unthinkable to accept loss or shake hands with the winner. A game becomes more like a battle: the winner gets the honour and the glory and the loser shame and humiliation. When the rivals belong to different countries, it is even worse: a fight between two peoples; a matter of life or death.
We direly need to review our sports scene in order to establish new principles based on respect and fraternity. Even though punitive measures are indispensable to deter fanatics, they are by no means sufficient. The former regime used to see in sports a tool to divert people’s attention from the real socio-economic problems. Now that our homeland is being swept by winds of change, the role of sports has to be reviewed and the current distorted scene cannot be allowed to last under the pretext of entertaining the long-suffering people.
I am sorry to say that this kind of sport is evil. When chauvinism and fanaticism prevail, victory leaves us with a bitter aftertaste no different than that of defeat.
Many, including myself, have stressed the need to reconsider the national objectives of sports: is it health and fitness, or is it winning championships? Proud achievements in the field can never be worthwhile if sports are not widely practised as a lifestyle component with health-related targets. Broadening the base of practitioners in all age brackets is a precondition to improve Egypt’s sports record on the world scale, because it would offer a much wider pool of talent. Otherwise, the country’s record will remain modest.
With Egyptians now involved in a national dialogue to draw a roadmap for the future, I believe that sports should figure prominently in this process. Rather than a luxury activity or a means of leisure, sports represent an essential life component. Educators are unanimous in confirming the key role it plays in maintaining good health and preserving fitness, to say nothing of the values it establishes and the ethics it stresses.
It causes unspeakable pain to realise that the evil sports scene is being passed over to our children, distorting the moral content of the sport through mutual insults, physical confrontations and other aggressive behaviour. What right can we have, then, to blame our young people for carrying on the tradition?
We need to use the utmost firmness to purge the sports scene of hooligans and fanatics. And, if we aspire for sports ever to be the vehicle to sound ethics, good health, fitness, and wholesome entertainment, instead of its current rank as a source of chagrin and frustration, our public has to make the transformation from spectators to practitioners.
Tweet
Author