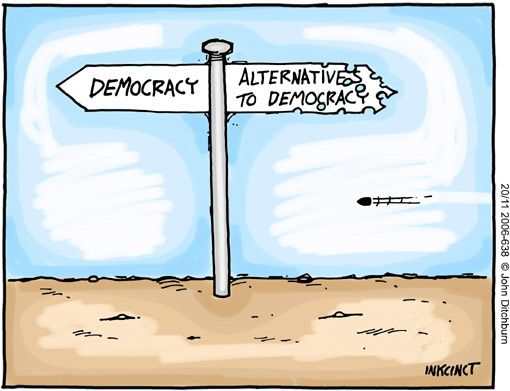 Is Egypt heading towards some form of liberal democracy? More importantly, does democracy always imply liberalism, with free and fair elections, the right to political expression and association and the rotation of power?

According to German philosopher Carl Schmidt, democracy can never be liberal. Democracy is the rule of the people, the demos in Greek. Athenian democracy, which has always served as the classical prototype for modern political systems, was made up of citizens. Free and adult Athenian males were conceived as part of a civic whole. The essence of democracy is the absolute sovereignty of the people. In modern times, Jean-Jacques Rousseau's conception of democracy was based on the "general will" that transcends the will of any individual or group in a polity. Ironically, Rousseau's definition of democracy could very well describe totalitarian societies in the twentieth century.
Schmidt held that democracy can be compatible with dictatorship when the people choose a dictator and delegate all authority to him as the embodiment of the general will. It was through this nightmarish scenario that Hitler got elected in Germany. Democracy as the absolute will of the people can lead to unreasonable outcomes, such as tyranny and the suppression of individual and minority rights.
Liberalism is based on a very different principle. In the liberal conception, the social whole is made up of individuals who bear inalienable rights. Schmidt traces the historical roots of liberalism to 17th and 18th century Britain where a nascent bourgeoisie of merchants sought ideas to defend themselves and their property against the king. John Locke, the father of modern liberalism, invoked individual human rights as divine and metaphysical. He claimed three main rights that individuals held against their sovereign: habeas corpus, freedom and property.
Liberalism has no conception of politics. Rather, it just has a critique of politics where the rights of individuals are always held against any encroachment, be it by the king or the popular majortiy. In liberal democracies are not based on the absolute will of the people but the absolute rights of the individuals. Isaiah Berlin, the famous 20th century liberal philosopher, held individualism to be the sole bulwark against totalitarianism.
How do these debates relate to recent developments in Egypt? The question of democracy has received much attention since the revolution (i.e. the true and sincere representation of the will of the people through free and fair elections and the right to form parties and associations). However, absent the proper safeguards, these reforms can easily lead to an elected dictatorship of the majority. Indeed, democracy can go hand in hand with systematic discrimination -- against religious and ethnic minorities, women, and so on.
The Egyptian political sphere is filled with forces whose commitment to human rights and personal freedoms is anything but clear. Fears are already being expressed by Copts, feminists and secularists over a possible electoral “take-over” by the Muslim Brotherhood and other Islamist forces. Many believe this may pave the way for a new kind of religious tyranny with a popular mandate.
The real guarantee for the respect of human rights is a liberal constitution that departs from the fact that society is made up of individuals who enjoy inalienable rights that cannot be compromised by the state or by public opinion. Unless democracy and liberalism are sought simultaneously, authoritarianism may well assume new forms in post-Mubarak Egypt.
Tweet
Pope Shenouda Article