Muslims Attack Christian in Egypt, Cut Off His Ear 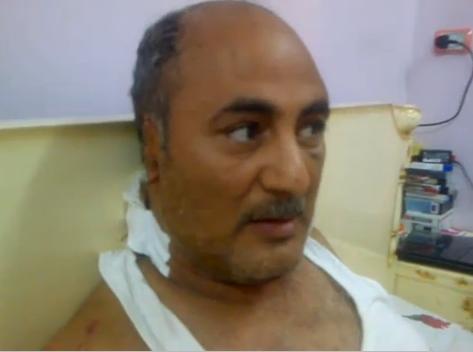 (AINA) -- A group of Muslims attacked Ayman Anwar Mitri, a 45 year old Christian Coptic man in the Upper Egyptian town of Qena, cutting off his ear. The Muslims claimed they were applying Sharia law because Mr. Mitri allegedly had an illicit affair with a Muslim woman. The Muslims called the police and told them "We have applied the law of Allah, now come and apply your law," according to Mr. Mitri in an interview for the Egyptian Human Rights Organization.

Mr. Mitri, a low grade administrator at a secondary school, from elHasweya, in Qena, 492 KM from Cairo, had rented his flat to two Muslim sisters, Abeer and Sabrin Saif Al-Nasr, through an agent. After nine months he learned the sisters had been indicted for prostitution, so he asked them to leave and they did.
On Sunday, March 20 Mr. Mitri was informed by a friend via a phone call at 4 AM that the flat where the Muslim sisters lived was on fire; he went to the flat. While waiting in the torched flat a Muslim named Alaa el Sunni came and berated him for renting his flat to prostitutes. "I tried to calm him down," said Mr. Mitri, "and told him I knew nothing about the two women since they came through an agent." Alaa suggested they would go somewhere quiet to clear the misunderstanding. They went to the flat of Mr. Mitri's friend Khaled, a policeman, where 12 Muslims were waiting for him. They started beating him and saying "We will teach you a lesson, Christian" and "This serves your right for renting your property to prostitutes."
Believing this was the end of the episode, they asked him to call the Muslim woman, so that they would send her to her father. When the woman refused to come, they asked a female Muslim neighbor to call her, saying that her belongings are with her. The woman, Sabrin, came and was told to say that she had a relationship with Mr. Mitri. "At first the woman refused, but after being beaten, she agreed," said Mr. Mitri.
Remembering his ordeal, he said that they sat him on a chair and a Muslim named elHusseiny cut his right ear off. "I felt so shocked that I do not even know what tool he used." They also made a a 10cm cut at the back of his neck, cut his other ear, his face and his arm (video showing wounds). Mr. Mitri said they wanted to throw him off the fifth floor but Khaled objected, saying he would get into trouble for just being there, since he is a policeman.
Mr. Mitri said that the Muslims tried to convert him to Islam, but he refused. The Muslims then called the police and told them to come and get the Copt saying "We have applied the law of Allah, now come and apply your civil law."
The police came and rescued Mitri and Sabrin, who told the police the Muslims forced her to lie about the illicit relationship between her and Mitri. A police report was issued, but no arrests were made.
"I feel humiliated and broken," said Mr. Mitri. "I have lost the income from the torched flat, my car, and have become disfigured. Who is going to restore my honor?"
His wife said in an interview that she is ashamed to go to work and feels very unsafe. She is afraid to let the children go to school and is hoping to leave the area.
At first Mr. Mitri said he wanted full compensation for his losses and even wanted revenge by cutting off the ear of the Muslim who cut his ear off. However, it was reported that a "reconciliation" meeting was made in the presence of Colonel Ahmed Masood, Vice military ruler of Qena, whereby Ayman Mitri and the Muslims came to an "agreement." Mr. Mitri had to withdraw the police report he filed against the Muslims.
Mr. Mitri appeared on the Coptic TV channel CTV, where he was asked about the reason he agreed to reconcile and forfeit his rights. Mitri said while sobbing "I was threatened, they threatened to kidnap the female children in our family."
Anba Kirollos, Bishop of Nag Hammadi, called on the armed forces to intervene and put an end to this "thuggery in the name of religion" so that this "infection" does not spread to other areas. He said if thuggery is put above the law the dignity and prestige of the State would be lost.
Tweet
Author