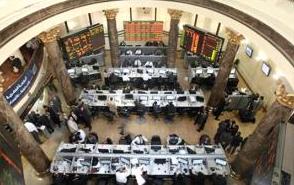 Egypt's benchmark index .EGX30 fell to its lowest level in nearly two years on Thursday, the second day of trade since political turmoil closed the bourse for more than seven weeks. However, the broad index reversed its decline and closed higher at 0.9 per cent. "There should be a cancellation of the exceptional procedures that have been applied upon the resumption of trading on the stock exchange last Wednesday, which aimed at stabilising the market," Mohamed Abdel Salam, chairman of the bourse, was quoted as saying. "There are talks with the Egyptian Financial Supervisory Authority (EFSA) to announce the cancellation of these procedures on Sunday ... one of these procedures include the return of the trading session to four hours instead of three," MENA quoted Abdel Salam as saying. The cancellation would also revive over-the-counter (OTC) trading procedures, MENA reported. The government has been reluctant to restart normal trade until compensation was arranged for small investors caught out by falling share prices and safeguards put in place to prevent anyone under investigation from shifting funds abroad.