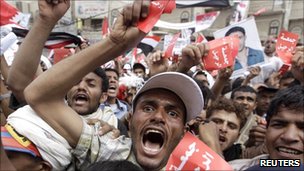 Agreement is close on a transfer of power from Yemen's veteran President, Ali Abdullah Saleh, a government minister says.

After six weeks of protests, Mr Saleh has said he is willing to step down this year.
But the demonstrators want him to go immediately.
This is the first time the government has confirmed that President Saleh is negotiating the terms of his departure, observers say.
They add that amid the growing pressure, many see the statement by Foreign Minister Abubakr al-Qirbi - a close ally of the president - as a clear sign that Mr Saleh's resignation is now a matter of time.
It comes a day after tens of thousands people attended rival mass rallies in the capital Sanaa.
Last week some 50 people were shot dead at an anti-government protest.
In recent weeks, Mr Saleh's power base has been hit by top military figures and tribal leaders joining the opposition.
'Serious dialogue'
"I hope it will be today, before tomorrow," Mr Qirbi told Reuters news agency.
He said he was optimistic the time frame for a transfer of power could be negotiated.
"President Saleh is willing to look at all possibilities, as long as there are really serious commitments by the JMP (opposition) to come and initiate a serious dialogue between them and the ruling party," he said.
On Friday, Mr Saleh told a rally of his own supporters he was ready to hand over power, but only to "safe hands".
A correspondent for the BBC in Yemen says there are, however, many other obstacles that need to be overcome for the crisis to be resolved - the biggest being the actual structure of the power transfer.
Another big issue is the future of Mr Saleh's relatives, some of whom hold powerful government posts, our correspondent says.
Two relatives who are particularly unpopular with the protesters are:
the president's son Ahmed, who is in charge of the Republican Guard
his nephew and son-in-law Yahia Saleh, who heads the security forces.
Mr Saleh's ruling party, General People's Congress, said on Saturday that he should serve out his term until 2013, AFP news agency reported.
Yemen, the Arab world's most impoverished nation, is a key ally in the US-led fight against al-Qaeda, which has established a strong presence there.
Two recent bomb plots against US targets - two American cargo planes in October and a Detroit-bound airliner in December 2009 - originated in Yemen.
Tweet
Pope Shenouda Article