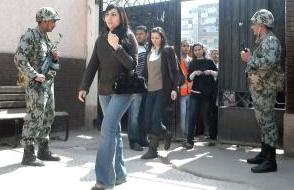 CAIRO (Update 6) - Egyptians flocked to the polls on Saturday for the first time since President Hosni Mubarak was toppled to vote in a referendum on constitutional reforms which the military rulers hope will allow elections within six months.

By early morning, queues of hundreds had formed at polling stations across the country to cast ballots in the first vote in living memory whose outcome has not been known in advance. The result will determine how quickly Egypt can hold elections. "It is too early to tell what the voter turnout is, but it is clear that this is unprecedented," Ahmed Samih Farag, a human rights activist and monitor with the Egyptian Coalition for Election Monitoring, told Reuters, surveying queues of voters. Egypt has been alive with debate over the referendum and the country is divided between those who say the constitution needs a complete rewrite and others who argue that the amendments will suffice for now. "I voted yes - yes for stability and for things to go back to normal," said Mustafa Fouad, 24, an engineer voting in Cairo at a polling station. "I voted no. This is not enough," said Atef Farouk, who arrived at the same polling station with his wife and three daughters, who waved an Egyptian flag as their parents voted. "We want a new constitution," added Farouk, 41. The polls opened at 8.00 a.m. (0600 GMT) and close at 9 p.m. (1900 GMT). The result is expected to be announced on Sunday evening or Monday morning, a member of a judicial committee involved in overseeing the election told Reuters. "The country is finally ours and we will never let it slip again by staying at home when we should be right here, in line, to make our voices heard," said Om Sayyed, 65, queuing at one polling station. "I am old and this isn't for me, its for my children ... it's important I teach them their voice counts," she said. The amendments were drawn up by a judicial committee appointed by the military rulers to whom Mubarak handed power on February 11. They are designed to open the door to legislative and presidential elections that will allow the military to hand power to a civilian, elected government. Mubarak was forced from office by a wave of mass protests demanding his removal and an end to autocratic rule in the country he had governed for three decades.