Egyptians to vote on constitutional amendments 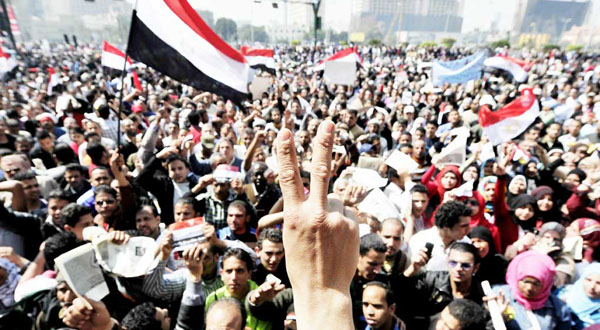 CAIRO: Egyptians are scheduled to go to the polls Saturday to vote yes or no on the constitutional amendments, in a step viewed by many as Egypt’s first true democratic experience.

"This is the first time in Egyptian history voters would be participating in a political process that is both credible and transparent," Mohamed Attia, head of the Supreme Judicial Commission overseeing the referendum, said in a statement on Tuesday.
Detailed official information on where and how Egyptians can vote quickly spread across the internet, to avoid any confusion or chaos during the voting process.
The commission supervising the referendum launched the website www.referendum.eg, and the Cabinet launched the website www.lagna.idsc.gov.eg, which guides Egyptians to the nearest polling stations in their governorates, along with detailed explanation of the amendments.
Human rights and civil society groups were also invited to monitor the referendum.
"The commission is committed to absolute transparency. We have nothing to hide," Attia said.
The Arab-European Center for Human Rights and International Law and The Egyptian Coalition for Monitoring Elections (ECME) said on Thursday that they were officially authorized to monitor the referendum.
Ihan Jav, the executive director of the Norway-based Arab-European Center, said that being allowed to monitor the referendum “represents an unprecedented change towards democracy in Egypt’s political arena.”
ECME said on its official website that they had designated 1,250 observers to monitor the voting in 26 governorates.
The ECME consists of 123 organizations including the Egyptian Organization for Human Rights and The Egyptian Center for Women’s rights.
A delegation including 14 members of the European Union was also scheduled to arrive in Egypt on Friday afternoon to monitor the referendum, according to online news portal, egynews.net.
The polling stations will be set up at schools and other public buildings in different districts around the country. The voting is scheduled to take place from 8 am to 7 pm in the announced locations.
The 45 million eligible voters need only a national identity card to cast their ballot and can do so in any polling station, even if it’s far from their place of residence as indicated on their ID.
Indelible ink will be used to prevent multiple voting.
Attia said in a phone interception with “Akher Kalam” program on ONTV channel on Thursday that the results of the referendum will “most probably” be announced late Sunday.
Atti called on the judges who weren’t listed to monitor the polling stations to head to the nearest preliminary court to request participation in the supervision of the voting, adding that it was every judge’s duty to participate in overseeing the polling process.
The Supreme Council of the Armed Forces suspended the constitution on Feb. 13 after it assumed power when former president Hosni Mubarak stepped down two days earlier following almost 30 years in power.
An appointed panel of legal experts drafted the proposed amendments in 10 days, as the military council strove to restore civilian rule as quickly as possible and keep the army above the political fray.
The amendments ease restrictions on independent presidential candidates, stipulating that candidates are eligible to run if they collect 30,000 signatures from at least 15 governorates in Egypt, with a minimum of 1,000 supporters in each, or if they are endorsed by 30 members of parliament, or if their party has at least one seat in parliament.
A president can only rule for a maximum of two four-year terms, according to the proposed amendments.
The amendments proposed to Article 75 set conditions for presidential candidates that include a minimum age of 40, stipulating that the nominee and his or her parents be Egyptian citizens who never had foreign citizenship. Potential nominees cannot be married to a non-Egyptian.
The president is committed to appointing one or more vice presidents within 60 days of taking office.
The military urged "yes" and "no" supporters alike to have their voices heard and turn out to vote.
In a statement on its Facebook page, the military council described the vote as "democratic Egypt's birth certificate".
"Accepting or rejecting the amendments is the right of each Egyptian. Cast your vote to preserve the gains of the January 25 Revolution," it said, referring to the launch date of the anti-Mubarak protests.
In a text message sent to mobile phone subscribers in the early hours of Friday, the armed forces said simply: "The referendum on the constitutional amendments = democracy."
Tweet
Pope Shenouda Article