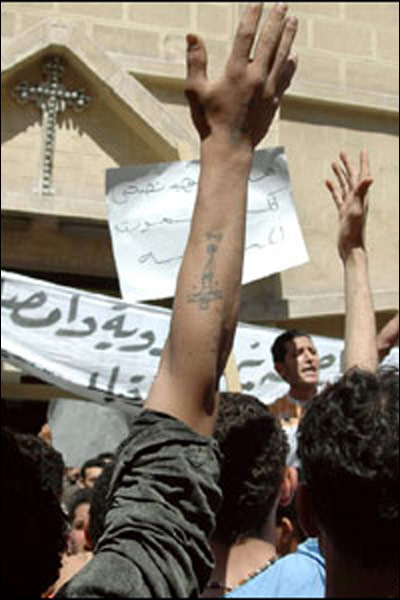 I have never reviewed a book in this space; book reviews have their special place on the literary page and are reviewed by specialised staff. Yet today I intend to review a book and I have a very special reason for doing so. The Muslim-Christian solidarity, which followed the heinous bombing at the Church of the Saints in Alexandria on New Year Eve killing more than 24 and wounding some 90, should be fully exploited to effect imperative change, and should never be left to lose steam. Candid dialogue is pivotal in achieving that end since it exposes the hardships and grievances Copts endure day in day out, which should in turn fortify the public opinion calling for the enforcement of equality and citizenship rights. For its part, the State should initiate measures to reform the flawed conditions Copts suffer under.

A book I read a few months ago came strongly to my mind as I contemplated the need for candour and exposure. The book, Haret al-Nasaara (The Coptic Quarter), was written by the young author Shamei Assaad and carried a spontaneous, transparent depiction of the daily reality of the Coptic community. According to the publisher’s note: “In this book, we see and hear for ourselves how, according to the author, an entire homeland to be proud of shrinks to the size of a mere quarter in which the Copts keep to themselves. It is the story of every Egyptian Christian young man or woman.”
Being neither a literary critic nor a history or socio-politics scholar, I will not critically tackle the content of the book, but will merely cite excerpts which reflect the author’s thought. “This book,” the author writes, “tackles the everyday problems faced by Copts and focuses on the tension that has found its way between Muslims and Copts. Out of a real desire for a dialogue built on understanding, I will tell you about the ‘other’ who is me, and those who made me an ‘other’. It is an attempt at a word of reason, out of fear and rejection that the homeland should be reduced into a Coptic quarter. The book was written not to wound but to bandage; reconciliation can only begin with candid, gentle reproach.”
“Do we all speak of the same Egypt?” Assaad asks. “I imagine not. Each of us sees Egypt differently; each of us wants it different than the other. Some want it Islamic, others Christian, others Wahabi, while a few among whom I am want it Egyptian.
“While a Muslim child grows up in an environment friendly to his faith and expects everyone around to accept this implicitly, a Christian child realises early on that he carries something ‘different’. This realisation is imposed upon him in the street, in school, everywhere. It does not take long for him to get accustomed to being different and to expect to be treated as such. The Muslim and the Christian acquire a different disposition and frame of reference; a Muslim finds full societal support while a Copt meets with obvious rejection. A small girl complains to her mother that the pupils in her class won’t play with her because she is Christian. Who taught the children they were different? And why does it have to breed such cruelty? Admittedly, some teachers fill children’s heads with extremist notions, but is there no-one to stop them or take them to account? And do families who teach their children hatred for the other at such an early stage realise the evil they commit?
“For a long time I used to think that the problem with church building was between two parties: the Copts and the State. Copts have to go through horrendous paper work and procedures, and obtain administrative and security approvals from public servants that range from junior officials up to the president of the republic once they decide to build a church. Recently, I have had to include a third party in the problem, a party that is more of a problem than the State itself. That is the religious extremists who fly in a rage once they hear a church is being built, as though that church would threaten or destroy their faith. This is the reason we frequently hear of the burning of churches or of houses in remote villages where it is suspected that Christians are conducting prayers. Attacks are more often than not waged following the Muslim Friday prayers. If an extremist imam incites the worshippers to attack, how can mainstream Muslims accept that? And what is so threatening or upsetting about Christians praying in some house or another? Do Muslims really fear churches? Are they that afraid for Islam? Do they really see Christian prayers in a non-licensed place as a crime of honour? And if so, who is in charge of penalising the Copts, the State or individuals. Are we in the process of turning into a tribal community?
“I can’t help blaming moderate Muslims for refraining from standing with the Copts. But a major part of the problem is that they should realise there is a problem in the first place. Many Muslims are convinced that Copts have more than they need of churches; I don’t know who gave them the right to allot the share of places of worship adequate for each sector of Egyptians. Are coffeeshops in Egypt sufficient for people’s needs?
“Many Muslims express their anger at the use of some Coptic houses for prayer, calling them secret churches. But why do Copts have to pray in secret in the first place? Do Muslims see that Copts should hide whenever they need to pray? Not to mention that houses may act as adequate places for prayer, but they can never be adequate for holding a wedding or a funeral. For that you do need a church. More importantly, specific services, including Holy Mass, must be performed on an altar, that is, in a proper church.
“Is it obvious now why I don’t see unfair laws as the only hindrance to building churches? It would definitely be a positive measure if a unified law for places of worship is passed, but it would be no answer to the problem as long as hate, fanaticism, and extremism persist.”
Haret al-Nasaara is truly a reading in a plethora of Egyptian problems placed on hold. The above were but a first glimpse; there is more to come.
Tweet
Author

The most serious sin in one's life

A person often forgets the sins he committed, but there may be certain unforgettable sins. David the Prophet for instance asked the Lord in his prayer to forget his many sins, saying, "If You, Lord, should mark iniquities, O Lord, who could stand?" (Ps 130: 3) "Do not enter into judgment with Your servant, for in Your sight no one living is righteous." (Ps 143: 2) "Do not remember the sins of my youth, nor my tra