Christians Under Siege in Middle East 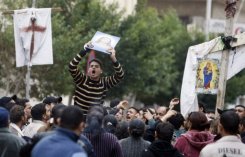 Christians are increasingly under siege in Egypt and Iraq. Over the past year, hundreds have been killed or wounded in attacks, and the violence is further raising political and sectarian tensions in the two countries. All people, regardless of their beliefs, should be outraged.

The latest incident in Egypt occurred in Alexandria on New Year's Day. Twenty-three people were killed and nearly 100 wounded in a bombing after a midnight Mass at a Coptic Christian church. Since then, there have been three days of unrest as Coptic Christians have taken to the street to protest and demand government protection.
Egypt often tries to keep a lid on things by blaming foreign actors for Muslim-on-Christian violence, and President Hosni Mubarak quickly pinned the attack on "foreign fingers." Officials later said local Egyptians might also have been involved. Authorities need to find and prosecute all who were responsible.
Unfortunately, extremists have fertile ground in Egypt, where tolerance and diversity were once prized. The Mubarak government has a longstanding policy of repressing Muslim fundamentalists, further radicalizing these groups. And, as its political support has waned, it has sought to pander to the Muslim majority by discriminating against other religions -- especially Coptic Christians, who are about 10 percent of the population, and the smaller Bahai community.
Meanwhile, thousands of Christians have fled Iraq since an October siege at a Baghdad church that killed 51 worshipers and two priests, and a subsequent series of bombings and assassinations singling out Christians. The Islamic State of Iraq, a group affiliated with Al Qaeda, claimed responsibility for the church attack and has threatened more to come.
Iraqi leaders, including Prime Minister Nuri Kamal al-Maliki, have pledged to tighten security and have appealed for tolerance for minority faiths. They also need to ensure that the attackers are brought to justice. Extremist attacks must not become an excuse for more authoritarianism in either Iraq or Egypt. But if the two governments do not bring things under control and provide security for all of their citizens, their once richly diverse societies will suffer. Mr. Mubarak and Mr. Maliki need to find the right balance, quickly.
__________________________
The New York Times, editorial
Tweet
Pope Shenouda Article