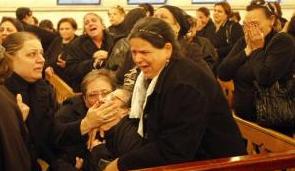 ALEXANDRIA - The Egyptian security authorities denied reports saying a suicide bomber, who reportedly detonated outside an Alexandria church on New Year's Eve, was identified as a Pakistani man, calling on media outlets to stick to accuracy in their reports, Xinhua informed.

"A forensic report on the details of the blast is expected to be submitted to prosecutors next week after finishing the DNA analysis for the victims," said El-Sebai Ahmed, head of the Forensic Authority.

The bombing, outside a Coptic church in Egypt's Mediterranean city of Alexandria following a New Year's Eve mass, killed 21 Coptic Christians and injured nearly 100 others. It is the deadliest attack in Egypt in years.