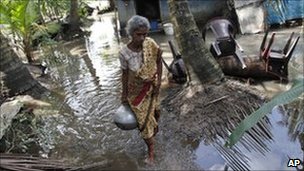 The UN is to launch an appeal for emergency flood aid for Sri Lanka, where at least 32 people have died and more than 300,000 have been displaced.

"I urge donors to generously support priority needs such as mosquito nets, clean water and food," UN humanitarian co-ordinator Neil Buhne said.
Flood waters are now receding in the worst-hit areas in eastern and central Sri Lanka.
But aid agencies are warning of the danger of water-borne diseases.
Mr Buhne said in a statement that the UN's aid appeal would be issued in the coming days.
He said that funds were urgently needed to help replant flooded rice fields and also compensate people affected.
The floods have inflicted terrible destruction on the rice crop which was soon to be harvested, the BBC's Charles Haviland in Sri Lanka reports.
Much of the land in the worst-affected areas is still flooded, with crops and vegetation just peeping out, our correspondent says.
But he adds that the weather is getting warmer and dryer, bringing water levels down after weeks of heavy rain.
Some people have now begun returning from specially set-up displacement centres to their homes.
Tweet
Pope Shenouda Article