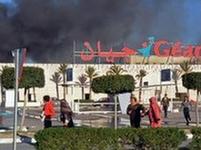 A fire has swept though a prison in the Tunisian resort town of Monastir, killing at least 42 people amid continuing unrest following the removal of President Zine al-Abidine Ben Ali.Looting hit the suburbs of the capital Tunis after he fled the country on Friday.

Troops are patrolling the city centre and a state of emergency is in force.
The violence came as the Speaker of parliament, Foued Mebazaa, took over as interim president.
He said he had asked Prime Minister Mohammed Ghannouchi - who earlier said he was in temporary charge - to form a national unity government.
In a televised address, Mr Mebazaa said all political parties including the opposition would be consulted.
"All Tunisians without exception and exclusion must be associated in the political process," he said after taking the oath. Under the constitution a new presidential election must be held within 60 days.
The BBC's Wyre Davis, in Tunis, says the political developments come against a backdrop of increasing violence.
A doctor at Monastir hospital told the BBC it had received 42 bodies so far following the prison fire.
The identities of the victims and the cause of the fire are still unclear.
Earlier on Saturday an eyewitness in the city, about 160km (100 miles) south of Tunis, told Reuters news agency: "The whole prison is on fire, the furniture, mattresses, everything."
In Tunis, soldiers and police exchanged fire with gunmen outside the interior ministry, media reports said.
The Associated Press said its reporters had seen "two bodies lying on the ground" - it was not clear who they were, or whether they were dead or injured.
The capital's main thoroughfare, Avenue Habib Bourguiba, was blocked by security forces after an overnight curfew was lifted.
Troops and tanks are protecting official buildings and the streets are largely deserted, correspondents say.
Overnight looting continued into Saturday in the city's suburbs, with French-owned supermarkets among the properties targeted. The city's main railway station has been badly damaged by fire.
Tunis Carthage International Airport, which was closed amid Friday's unrest, re-opened on Saturday. Hundreds of tourists and other foreigners have been trapped there.
Our correspondent says people are now waiting for some indication that the interim administration is prepared to bring in widespread economic and political changes.
Late on Friday Mr Ghannouchi, the prime minister, assumed the interim presidency, saying his "very first priority" was restoring security.
"We are at the service of the Tunisian people. Our country does not deserve everything that is happening. We must regain the trust of citizens in the government," he said.
But on Saturday, the country's Constitutional Council declared that Mr Mebazaa, the Speaker of the lower house of parliament, should be the country's new interim president.
In the past four weeks, protests have swept the country over unemployment, food price rises and corruption. Security forces used live ammunition against protesters and dozens of people died.
The African Union condemned "excessive use of force against the demonstrators". A statement called for no efforts to be spared to avoid any further loss of life.
Mr Ben Ali, who had been in power for 23 years, conceded power on Friday after the unrest culminated in a giant rally against him in Tunis.
He flew out of Tunisia with his family and, after the French government rejected a request for his plane to land there, was allowed to refuel in Sardinia before landing in Jeddah, Saudi Arabia.
A Saudi palace statement said: "Out of concern for the exceptional circumstances facing the brotherly Tunisian people and in support of the security and stability of their country... the Saudi government has welcomed President Zine al-Abidine Ben Ali and his family to the kingdom."
French President Nicholas Sarkozy said on Saturday the Tunisian people had "expressed their democratic will" and called for free elections as soon as possible.
Britain's foreign secretary condemned the violence and looting and urged restraint from all sides.
There has been little official reaction from Tunisia's Arab neighbours to the events. On Saturday the Arab League called on Tunisia's political forces "to stand together and unite" to maintain peace.
The UK, the US and France are among the countries advising against non-essential travel to Tunisia.
Mr Ben Ali was only Tunisia's second president since independence from France in 1956. He was last re-elected in 2009 with 89.62% of the vote.
Tweet
Pope Shenouda Article