Behind the scenes: Fighting odds to cover Tunis turmoil 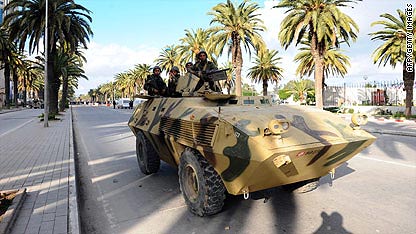 It may have been the last flight into Tunisia. Tunis Air Flight 848 from Beirut, Lebanon.
Throughout the flight I watched as the passenger in the seat behind me, an older Tunisian gentleman, got steadily more intoxicated on his bottle of Johnny Walker Black Label. Toward the end of the three-hour flight, he was asking fellow passengers in a loud voice if they wanted to join him in establishing a new party to promote democracy in Tunisia.

When we took off from Beirut, Zine El Abidine Ben Ali was still president of Tunisia, and had ruled the nation since 1987. When we landed, cell phones started going off, my BlackBerry was buzzing like an angry hornet. Ben Ali had left.
The stewardess informed us over the plane intercom that because of the general strike, we would not be able to retrieve our luggage, and because of the curfew we would not be able to leave the airport. This didn't seem to faze most of the passengers, who were busy discussing Ben Ali's departure.
"I'm glad he's gone," a businessman told me with a smile of quiet satisfaction. "Things will be better now. The problems are over."
For the CNN crew, it seemed like our problems were just beginning. What can you do sitting in an airport? How do you cover the story from a plastic chair in the arrival hall?
Camerawoman Mary Rogers of Cairo, Egypt, and I pondered our options, and they weren't good. There's only so much "atmosphere" you can get at an airport.
A crew from Tunisian TV was videotaping soldiers next to the arrival hall. A large army truck pulled up, disgorging more soldiers. Our prospects were looking worse by the minute, until a large man approached me and asked if I needed a taxi.
"A taxi?" I asked, taken aback. "But there's a curfew, there are checkpoints and I can hear gunfire. How can you take us to the city?"
"Everything is fine," he responded. "I'll take you."
After some bargaining we settled on €40, a stiff surcharge, but I agreed. Better €40 than a night sleeping on a cold and gritty airport floor.
We put our hand luggage in the boot, got in and started to leave the airport. "The road is closed," someone shouted to us. I told Mary we had probably a less than 50% chance of making it to the hotel.
The driver seemed to think I was optimistic. "You realize I'm gambling my life to do this," he told me. But then added quickly "Everything will be fine."
So fine, in fact, all the while he was smoking one cigarette after another, taking phone calls from relatives, some as far away as France, asking how he was.
The highway from the airport was utterly deserted. Not a car, not a person. All the stores were closed.
After about 10 minutes we arrived in the city proper, where we encountered our first checkpoint, a tank and an armored personnel carrier. We stopped, the driver told them we were going to the hotel. They responded that the main road was closed; we would have to take a detour.
A few minutes later, another checkpoint. More soldiers, who ordered the driver out. They checked his papers, looked in the car, saw we were foreigners and let us proceed.
A minute later, another checkpoint. The soldiers made us all get out. I showed them my passport, explained I had made the mistake of choosing Tunisia as a vacation destination. They didn't think that was funny.
Nearby there were two young men on their knees, hands tied behind their backs. Unlike the previous checkpoints, this one was tense. The soldiers didn't like our presence, but eventually waved us on.
The streets were strewn with trash, in some areas broken glass. It was by no means a scene of destruction, but it was clear that earlier in the day thousands of people had been there.
The closer we got to the center of the city, the more soldiers we saw, as well as plain-clothes policemen carrying revolvers or automatic weapons. Where there were groups of soldiers, there were more young men on their knees with their hands bound. I looked down one street and saw three young men peering anxiously around a corner. Although it was quiet, something was afoot.
"Rawah!" a soldier shouted at us as we drove by. "Go home!"
"We're almost at the hotel. Pay me now," the driver said.
"But where is the hotel?" I asked. "I see nothing."
"There it is," he said, pointing to a large white siding in front of a building. "Now hurry up and pay me. I need to get out of here and go home."
The main door was covered. A man stuck his head out from behind the siding and looked at us quizzically.
"Is this the hotel?" I asked him.
"Yes, yes," he responded, motioning urgently. "Come in quickly."
My "less than 50% chance of success" prediction was wrong.
Tweet
Pope Shenouda Article