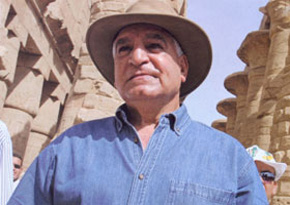 "An Egyptian-Dominican team made the discovery at the temple of Taposiris Magna, west of the coastal city of Alexandria," said Egypt's Supreme Council of Antiquities.
"The well-preserved statue may be among the most beautiful carvings in the ancient Egyptian style. He says the statue could belong to King Ptolemy IV," said Hawass.
The statue's height is 53 inches (135 centimeters) and its width at the shoulders is 22 inches (55 centimeters).
Alexandria was the seat of the Greek-speaking Ptolemaic Dynasty, which ruled Egypt for 300 years, until the suicide of Queen Cleopatra.
Tweet
Pope Shenouda Article