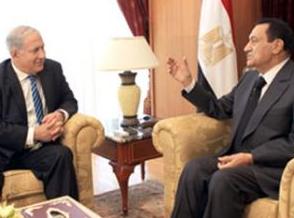 Palestinian-Israeli indirect talks, expected to start within a few days, were discussed on Monday at a meeting between President Hosni Mubarak and Israeli Prime Minister Benjamin Netanyahu in the Red Sea resort of Sharm el-Sheikh.
Egyptian President Hosni Mubarak (R) meeting with Israeli Prime Minister Benjamin Netanyahu in the Egyptian Red Sea resort town of Sharm El-Sheikh on Monday.
The meeting came two days after the Arab League backed proximity" talks, which Washington said would begin this week with the end goal of having direct negotiations between the sides.
Mubarak held one-on-one talks with Netanyahu over the Egyptian and international efforts to launch the indirect talks between Israel and teh Palestinians, Egypt's official Middle East News Agency (MENA) reported.
US Middle East special envoy George Mitchell is to due arrive on Friday in the region to start a new round of talks with the Palestinians and Israeli leaders on the resumption of indirect negotiations.
However, Arab League Secretary General Amr Moussa said that indirect talks would not immediately lead to direct negotiations.
Israeli-Palestinian peace talks were suspended in late 2008as Israel headed for elections. They have not been renewed since then, despite the efforts of the Obama administration to get them going again.
In March, Arab states said they would allow the US four months for so-called proximity talks between the Israelis and Palestinians. However, the decision was rescinded shortly afterwards over an Israeli plan to build housing in contested East Jerusalem and then agreed upon again this past weekend.
The Mubarak-Netanyahu talks touched on the situation in the Hamas-ruled Gaza Strip, weapons smuggling from the Sinai Peninsula into the blockaded enclave, and on Cairo's demands that Israel's nuclear facilities be opened to inspection, Israel Army Radio reported.

Meanwhile, Palestinian President Mahmoud Abbas is expected to hold a meeting with Mubarak tomorrow over indirect talks with Israel and the outcome of his contacts with the US on them.