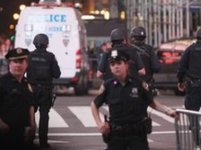 New York City police have defused an improvised car bomb parked in Times Square, one of the city's busiest tourist areas, officials say.
They say propane tanks, fireworks, petrol, and a clock device were removed from a parked sports utility vehicle.
Part of the district - where many theatres are sited - was sealed off.
Both US President Barack Obama and New York City Mayor Michael Bloomberg praised the quick response by the New York Police Department.
"We are very lucky," Mr Bloomberg told reporters. "We avoided what could have been a very deadly event."
"We have no idea who did this and why," he said, adding that the incident was a "reminder of the dangers that we face".
Correspondents say New York City police are on constant alert after a series of alleged terror plots in the wake of the 9/11 attacks.
Suspect spotted
The security alert was triggered when a street vendor saw smoke coming from a black Nissan Pathfinder parked on 45th Street and Seventh Avenue at about 1830 (2230 GMT) on Saturday.
Police shut down several blocks of Times Square, as well as subway lines, while a robotic arm broke windows of the vehicle.
"There were explosive elements, including powder, gasoline, propane and some kind of electrical wires attached to a clock," police spokesman Paul Browne told reporters early on Sunday.
"No motive has been identified," he added.
Security videotapes are being reviewed after reports that a person was seen running away from the vehicle.
The car's plates do not match the registration, the spokesman said.
Jerry Brown, one of the tourists evacuated from the nearby Marriot Marquis hotel, told the BBC: "Guests are sitting on the street and there is considerable chaos... There is talk about moving us to another hotel but I am not sure how this is going to happen."
Most Broadway shows went ahead despite the alert.
FBI agents have joined NYPD investigators at the scene.
The White House said President Obama was being kept up to date on the investigation.
The most recent terror alert in New York City involved a plot to set off suicide bombs in the subway system.
Earlier this year an Afghan immigrant, Najibullah Zazi, and an associate, Zarein Ahmedzay, both pleaded guilty in connection with the attempt.
Tweet
Pope Shenouda Article