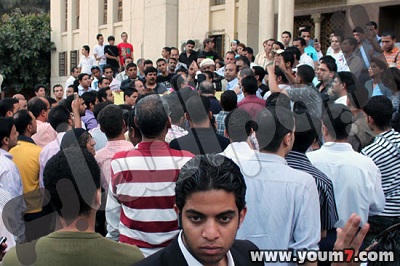 (AINA) -- Nearly 2000 Christian Copts staged a sit-in on Wednesday, April 28, 2010 inside the grounds of St. Marks Cathedral in Cairo during the weekly lecture of his HH Pope Shenouda III, protesting against what they termed as the procrastination of the judiciary in the Nag Hammadi Christmas Eve Massacre case, and their fear that it will have the same fate as the previous cases where in the end the Muslim killers were acquitted.

The demonstrators held banners and chanted slogans showing their anger over the continued deferral of the trial and the continued support of Mubarak's ruling National Democratic Party (NDP) for the 'real instigators' behind the massacre. Many observers believe the accused killer Mohamad el-Kamouny was only an object and that the government is shielding high ranking members in the NDP who are behind the massacre.
The media including, Egyptian and Arab TV channels, were prevented from attending the demonstration by the state security and the Cathedral guards, but two reporters managed to slip in.
The protesters criticized the stance of the NDP through chants like "We will not elect the NDP, its members kill Copts" or "a racist party which is promoting discrimination." They also held banners saying "Shout out loud…the rights of the martyrs will never die" and "Egypt is our homeland and we will not leave it...because Egypt is the land of the Copts" (video of sit-in).
When the protesters called for a Coptic boycott of the NDP in the coming elections, state security moved in and tried to break up the sit in, but their efforts were in vain. The majority of the protesters were young men and women had come from Nag Hammadi, a 12-hour bus journey, were not intimidated and stressed their right to be within the grounds of St. Mark's Cathedral.
Among those who also came from Nag Hammadi for the sit-in was the father of Abanoub, one of those killed in the shooting. He said the adjournment by the court is having its toll emotionally on him and his wife. "I only want justice for my son from whoever killed him."
Bishop Kirillos of Nag Hammadi told Freecopts that he fears the case would have the same disappointing fate like the previous cases of El-Kosheh, Abu Fana and others. "I am not reassured at all," he said
Following the Nag Hammadi shootings, in which six Copts were shot dead as they left church after celebrating Midnight Mass on the Coptic Christmas Eve on January 6 (AINA 1-7-2010), fingers pointed at Abdel Rahim al-Ghoul, MP for Nag Hammadi for being the main instigator behind the massacre, due to a feud going back to the elections for the seat of Nag Hammadi in 2005, when the Copts refused to give him their votes. It was reported that he vowed to take his revenge on them. It is common knowledge in Nag Hammadi that Mohamad el-Kamouny is one of al-Ghoul's 'boys' who intimidate voters to give al-Ghoul their votes.
The MP was interviewed by all TV stations regarding this relationship which he flatly denied until a video surfaced and was brought by "The Truth" TV program, showing al-Ghoul inaugurating a health club belonging to el-Kamouny; the video showed them to be on very friendly terms. (video showing the two together). 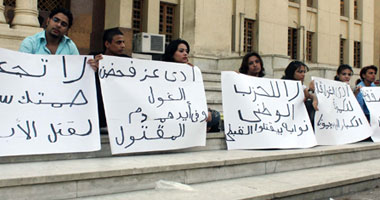 According to al Dostour newspaper on January 31, al-Ghoul threatened that if he was to be charged he would "reveal the truth behind the massacre."
The Egyptian Public Prosecutor asked for the lifting of parliamentary immunity from MP al-Ghoul to question him regarding insulting the Coptic MP Georgette Kellini on national TV by calling her a "criminal." Kellini was sent by the Egyptian Human Rights Organization to Nag Hammadi following the massacre and came back together with two colleagues with a damning report about the situation which led to the slaying. It was reported that the NDP members in Parliament supports al-Ghoul against Kellini.
What has angered the Copts recently was a visit of support from NDP Secretary Ahmed Ezz to al-Ghoul in Nag Hammadi. This visit was reflected in the chants against the NDP at the sit-in: "al-Ghoul told El-Kamouny, the Big Ones are protecting us."
Commenting on this visit, prominent Coptic activist Wagih Yacoub, who was among the Cathedral protesters, said "Now everyone knows the true relationship between al-Ghoul and the killer el-Kamouny, by still supporting al-Ghoul the NDP is sending a clear message to the Copts that the instigator of the massacre will escape justice."
Yacoub added, "We have come to know that there is pressure on two top Coptic lawyers Dr. Ihab Ramzy and Dr. Awad Shafik, to withdraw from the Nag Hammady case under the pretext that they are also representing the Copt Girguis Baroumi, who has been charged with raping a Muslim minor in Farshout" (AINA 4-10-2010).
Surprisingly, Mahmoud Abdel-Salam, who is the judge presiding over the trial of the three suspects of the Nag Hammadi shootings, is also presiding over the trial of Girgis Baroumi.
"We are fed up with government interference in the case, the news black-out by preventing the media and the activists from attending court sessions, and most of all barring the lawyers and relatives of the victims from attending court sessions. This is a scandal," Yacoub said.
Pope Shenouda recently described the Nag Hammadi massacre as an "international case" and not a local issue.
Tweet
Author