Obama Backs Down on Sudan 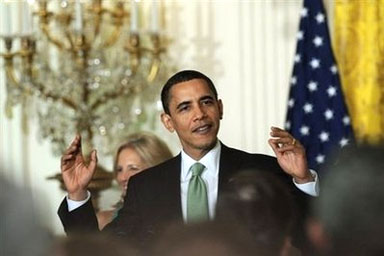 Until he reached the White House, Barack Obama repeatedly insisted that the United States apply more pressure on Sudan so as to avoid a humanitarian catastrophe in Darfur and elsewhere.Yet, as president, Mr. Obama and his aides have caved, leaving Sudan gloating at American weakness. Western monitors, Sudanese journalists and local civil society groups have all found this month’s Sudanese elections to be deeply flawed — yet Mr. Obama’s special envoy for Sudan, Maj. Gen. Scott Gration, pre-emptively defended the elections, saying they would be “as free and as fair as possible.” The White House showed only a hint more backbone with a hurried reference this week to “an essential step” with “serious irregularities.”President Omar Hassan al-Bashir of Sudan — the man wanted by the International Criminal Court for crimes against humanity in Darfur — has been celebrating. His regime calls itself the National Congress Party, or N.C.P., and he was quoted in Sudan as telling a rally in the Blue Nile region: “Even America is becoming an N.C.P. member. No one is against our will.”Memo to Mr. Obama: When a man who has been charged with crimes against humanity tells the world that America is in his pocket, it’s time to review your policy.Perhaps the Obama administration caved because it considers a flawed election better than no election. That’s a reasonable view, one I share. It’s conceivable that Mr. Bashir could have won a quasi-fair election — oil revenues have manifestly raised the standard of living in parts of Sudan — and the campaigning did create space for sharp criticism of the government.It’s also true that Sudan has been behaving better in some respects. The death toll in Darfur is hugely reduced, and the government is negotiating with rebel groups there. The Sudanese government gave me a visa and travel permits to Darfur, allowing me to travel legally and freely.The real game isn’t, in fact, Darfur or the elections but the maneuvering for a possible new civil war. The last north-south civil war in Sudan ended with a fragile peace in 2005, after some two million deaths. The peace agreement provided for a referendum, scheduled to take place in January, in which southern Sudanese will decide whether to secede. They are expected to vote overwhelmingly to form a separate country.Then the question becomes: will the north allow South Sudan to separate? The south holds the great majority of the country’s oil, and it’s difficult to see President Bashir allowing oil fields to walk away.“If the result of the referendum is independence, there is going to be war — complete war,” predicts Mudawi Ibrahim Adam, one of Sudan’s most outspoken human rights advocates. He cautions that America’s willingness to turn a blind eye to election-rigging here increases the risk that Mr. Bashir will feel that he can get away with war.“They’re very naïve in Washington,” Mr. Mudawi said. “They don’t understand what is going on.”On the other hand, a senior Sudanese government official, Ghazi Salahuddin, told me unequivocally in Khartoum, the nation’s capital, that Sudan will honor the referendum results. And it’s certainly plausible that north and south will muddle through and avoid war, for both sides are exhausted by years of fighting.Here in Juba, the South Sudan capital, I met Winnie Wol, 26, who fled the civil war in 1994 after a militia from the north attacked her village to kill, loot, rape and burn. Her father and many relatives were killed, but she escaped and made her way to Kenya — and eventually resettled as a refugee in California. She now lives in Olathe, Kan., and she had returned for the first time to Sudan to visit a mother and sisters she had last seen when she was a little girl.Ms. Wol, every bit the well-dressed American, let me tag along for her journey back to her village of Nyamlell, 400 miles northwest of Juba. The trip ended by a thatch-roof hut that belonged to her mother, who didn’t know she was coming — so no one was home. Ms. Wol was crushed.Then there was a scream and a woman came running. It was Ms. Wol’s mother, somehow recognizing her, and they flew into each other’s arms. To me, it felt like a peace dividend.Yet that peace is fragile, and Ms. Wol knows that the northern forces may come back to pillage again. “I don’t want war,” she said, “but I don’t think they will allow us to separate.”My own hunch is that the north hasn’t entirely decided what to do, and that strong international pressure can reduce the risk of another savage war. If President Obama is ever going to find his voice on Sudan, it had better be soon.The New York Times