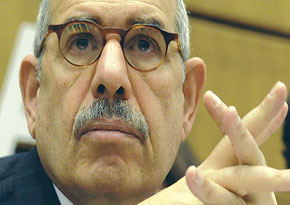 Mohamed ElBaradei The Arabic Network for Human Rights Information (ANHRI) reported Tuesday that the Saudi Arabian government should be proud to have seized the title ‘Prime Arabic Internet Enemy’ from Tunisia, according to ikhwanWeb.com
Their sarcastic statement came only two days after the Gulf kingdom blocked the Internet website promoting Egypt’s leading opposition figure Mohamed ElBaradei’s National Coalition for Change.
According to ANHRI, the Saudi government moved quickly, taking only 15 hours to block the site, which broke the record set in 2005 by Tunisian authorities when they blocked the site “Virtual Demonstration” in 18 hours after the launch.
While trying to access the Egyptian opposition website, launched by some Egyptian activists in the United States, Internet users in Saudi Arabia reported finding messages reading “Sorry, the requested site is not available.”
The Cairo-based pan-Arabic rights organization said it “deeply regretted the increasing frequency of site blocking in Arab countries … being an unacceptable seizure of views of opponents and critics of those governments and a flagrant violation of their legitimate rights to freedom of opinion and expression and circulation of information, especially when the blocking by a government is to compliment the government of another state.”
ANHRI added that it considers blocking a site that does not contain any material related to Saudi Arabia or calling for violence or pornography as “evidence clear enough of the hostility of the Saudi autocratic government to freedom of expression.
“It is a serious indicator of the severity of disregarding the freedom to use the internet, which has become one of the fundamental freedoms,” it continued in a statement released late Tuesday.
“Freedom to use the Internet would join the long list of lost rights and freedoms, which Saudi citizens and residents are denied. Those rights and freedoms are wasted by the Saudi government with no deterrent.”
Tweet
Pope Shenouda Article