• Inappropriate to prosecuting a fee to publish an Obituary, bordering on immoral.
• The idea of contributing to a project that has no religious value is contrary to the indigenous collective mind of the Egyptian people.

• Memory of the great is not only kept through awards or memorial ceremonies, but it is kept in their deeds.
• Switzerland Offered Abadir a “safe” chance of success.
• Leadership is earned through good deeds and not by seeking to acquire it.
• In the West, the Church is not the institution defining or dictating the political activity of individuals.
• Copts United is Abadir’s "plant" that will continue to grow bearing his name.
• There is an unjustified barrier between some and "Copts United".
• Abadir was typical of the true, untainted Egyptian. 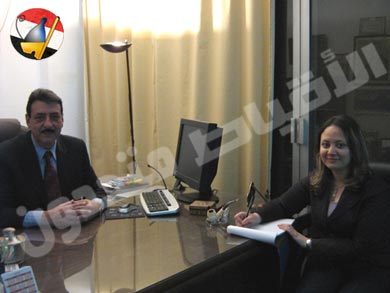 “Copts United" and its late founder, Mr. Adly Abadir had a positive impact on each individual that ever joined the team. It was through its pages that space was allowed for those who seek to distinguish themselves in the media. From here emerged the names of young journalists given a chance to success without being hindered for their youth and inexperience, and they grew big; for five years, many were offered a golden chance of success. After the untimely departure of Mr. Adly Abadir, the founder and father, “Copts United" went into a transition phase that is opportune for the enemies of success to brandishing swords edged with hatred and dripping with black lies, ill-wishing that the end is close to the successful offspring. In response to these, and to clarify the position of “Copts United” I had this meeting with the chief editor Mr. Ezzat Bouless.
** Could you describe your last meeting with the late Mr. Adly Abadir?
Ezzat Bouless: Last I saw Mr. Abadir was one day before his death in a hospital in Zurich. It was as with every other meeting I had with him, rich and deep. His mind was as vivid and conscious of everything going on around him as ever. He kept following-up all that is published in – or about - "Copts United". He also offered his views and opinions in a strong manner that always had me amazed by the strength of this man and his contributions to life; it was impossible to think that that man lying there in that hospital bed would depart life in a few hours.
In that last meeting, Heaven awarded Abadir for his life work by a message I conveyed to him which he received with satisfaction and happiness; as one of the many satellite channels – which one I do not remember specifically – broadcasted a dialogue with Dr. Mustafa Fiqi, Chairman of Arab Affairs Committee, the People's Assembly in which he directly and clearly admitted that Mr. Abadir struggle to achieve full citizenship for the Copts was fair. This strengthen my opinion that the author Abadir presentation of the Coptic Issue had finally found fair judgment from men that are in high and critical positions in the Egyptian regime.
** Abadir lived for many years in Switzerland and you also, what are the different forms of communication between you and what did you benefit from working with him directly?
Before the actual work for "Copts United" the relationship between us was restricted to various meetings from time to time to talk about some matters relating to the Coptic Church in "Zurich" as members of the same Parish. This remained the case until 2004, when Abadir organized and held the first convent [to discuss the Coptic Issue in Egypt]. Since then we became very close that he virtually changed the course of my life from engineering to journalism with all the vivacity and dynamism generating from the interaction with live individuals, not dead-silent hardware. By virtue of working I grew closer to the man to discover that his mind power carries a high degree of self-confidence. This made it easy for him to transform his thoughts to deeds regardless of the reactions that may be opposed to him; truly enough his opponents with time realized the value and authenticity of what he did because his multi-dimensional mind served his decisions right to a large extent.
Abadir was frank and did not know dodge however shocking or painful the truth may be, which is clearly attributed also to his self-confidence and strong personality.  He was a great judge of character, always capable of promoting the strengths of those who work with or for him to the benefit of the project whatever that may be; he’d used to tell me: “look in the eyes of those you talk to, and you’ll see through them to the core”.
On the other hand, away from work, Abadir is characterized by a great love of life, and to continue to function vigorously until eighty years of age is proof of that. In addition to this he is humble to the nth degree and this was a golden gateway to the hearts and minds of many who have dealt with him and came to appreciate how sensitive he was to others and how he went out of his way to help them through crises. Abadir was a “giver”; not an easy virtue to acquire and hold on to because it contradicts the natural selfish love of possession, which disadvantages are granted to us by our human nature first, well before the environment in which we grow. Undeniably, Abadir was passionate about his work which he dedicated most of his time and his spirit to, setting an example that motivated all those who worked with him and enflamed in them a very strong desire and dedication to the service objective commanded by a person such as Abadir.
**What did Egypt contribute to Adly Abadir, and then Switzerland in turn? 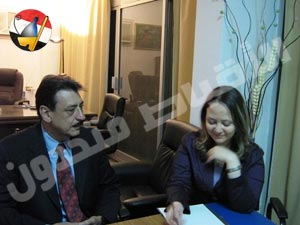