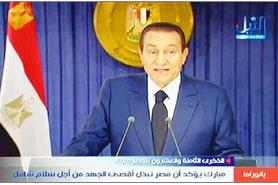 Mubarak promises fair elections in sinai day speech
An image grab from the Egyptian Nile TV shows President Mubarak giving a TV speech from an unidentified location on April 24, to mark 28 years since Israel withdrawal from Sinai.
CAIRO: “I affirm my commitment to the integrity of these elections,” President Hosni Mubarak said at his first televised speech since undergoing surgery in Germany last month.
The address was broadcast hours after state television showed him attending a ceremony at a war memorial in the Suez Canal city of Ismailia.
Mubarak stressed his commitment to fair and transparent parliamentary elections this year and at the presidential elections next year again in his speech saying,
“I welcome every national and sincere effort that proposes a view or solutions to the issues and problems of our nation, provided it does not gamble with its security, stability and future,” he added.
In the speech, which marks the 28th anniversary of Sinai Liberation Day, Mubarak said that Egypt is keen on having peace in the region and is committed to the peace treaty with Israel as long as the commitment is mutual.
He further highlighted Egypt’s efforts to achieve an independent Palestinian state with Jerusalem as its capital, as well as freeing the occupied lands in Syria and Lebanon.
Although he did not mention whether he plans to run in the 2011 presidential elections, Mubarak said that the government has made accomplishments in terms of the development and modernization of Egyptian society.
“[Whether it’s through] political reform based on democracy, economic reform attracting investment and creating job opportunities, or social reform which stands by the poor and the low income brackets,” he said.
Political analyst Emad Gad, from Al Ahram Center for Political and Strategic Studies, agrees with Mubarak that there has been progress.
“I cannot say there is no progress and reform taking place in the country,” he said. However, it is extremely slow that the people are practically not feeling it.”
Referring to political reform, he said that it can be illustrated by the protests and strikes taking place nowadays, something that wasn’t allowed before. As for the economic reform what is coming out of it can only be felt by a small minority.
“[What was said by] President Mubarak is a traditional speech given by a person in power, it could have been made in 1995 or in 2005,” said Gad.
The analyst also noted that while Mubarak has made a commitment to the integrity of the elections, he hasn’t promised the reinstatement of judicial supervision over the elections.
In addition, he referred to how the state-owned media has aggressively attacked former Director General of the International Atomic Energy Agency, Mohamed ElBaradei, when he announced that he could run for president next year.
“They want to reform from within and not change,” said Gad.
Mubarak said that he welcomed any presidential candidates “as long as constitutional precepts and the rule of law are adhered to and all actors have good intentions and the interests of the nation in mind."
On the other hand, he cautioned the “competition” (a reference to the opposition), against threatening the stability of the country. “We must all be careful that healthy competition in the service of the nation and its citizens does not transform into a slippery slope that threatens our collective future.”
Egypt’s largest opposition group, the banned Muslim Brotherhood, commented on Mubarak’s speech on its official website saying, “No positive remarks by Mubarak regarding amending the constitution were made. No decisions were made regarding the constant calls by opposing factors that have united, demanding political reform with fair elections and the elimination of emergency law for the country's wellbeing in the future.
“Despite remarks concerning his commitment to the integrity of the elections, the aging president has largely relied on the security apparatus which has engaged in wide campaigns against the opposition and, members of the MB in particular, in an attempt to intimidate citizens,” said the group.
Tweet
Pope Shenouda Article