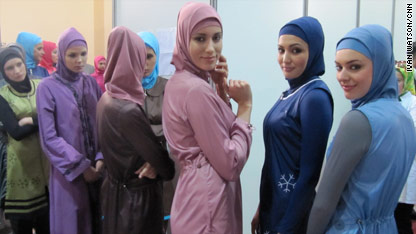 Istanbul, Turkey (CNN) -- Hair driers blast air and racks of clothing clatter past as organizers make their final preparations for a fashion show.
Some of the backstage bustle is downright comical. Short Turkish women, carefully wrapped up in trench-coats and brightly-colored Muslim headscarves, struggle to help towering, leggy models from Slavic and Latin countries change in and out of outfits.
This is not your typical fashion show. The show is highlighting Islamic women's clothing -- even though very few of the models working here are Muslim.
"Listen, I'm coming from Venezuela [where] we are always walking in shorts, t-shirts, flip-flops. Not afraid to show it. But here it's totally different," said Cristina Buderacky, a model who stood more then six feet tall in a peach-colored lycra outfit that resembled a pair of long-sleeved pyjamas with blousy trousers.
She later made a half-serious plea for help as a Turkish woman slipped a two-piece "bonnet" over her head. The headpiece tightly covered Buderacky's hair, leaving only her neck and face exposed.
Nearby, a Russian-speaking model dressed in a sky-blue version of the same outfit whispered to a friend, "I look like a clown."
Moments later, to the soundtrack of throbbing dance music, the women strutted across the stage dressed in an array of these pastel-colored costumes. The costumes are part of a swimsuit collection.
Known as Hasema after the Turkish company that manufactures them, the full-body suits are designed to let conservative women swim and exercise at the beach or pool without being too revealing.
Turan Kisa, an export marketer for Hasema, said the suits are exported to 35 countries.
"Muslim women are choosing these models," he said holding up a sequin-embroidered lilac-colored full-body bathing suit. "Especially the last five years, Muslim women [are] really following fashion."
According to the manufacturers at this trade show, the Islamic women's fashion industry is growing and evolving. It also seems to be co-opting sales and marketing methods perfected in the secular fashion world.
"Ten years ago, most of the colors were black or grey," says Halim Ozahi of the Turkish manufacturer Buketex. "Now you can see everywhere pink, yellow, blue."
Ozahi said during the same time period his company had gone from manufacturing 10 different dress designs to more then 150.
The designs on display here are a far cry from the black robes and all-concealing burqas many Westerners associate with the Islamic world.
"The younger generation of Muslims coming up, they want something stylish," said Hamza Ali, a visiting American who works with the South Carolina-based company Muslimclothing.com.
"There's nothing wrong with being beautiful, there's nothing wrong with being classy, nothing wrong with being fashionable, nothing wrong with wearing the latest thing out there. As long as it's modest," Ali added.
This relatively new industry may be growing, but it still appears to be dominated by men. Most of the sales representatives manning booths at the trade show are male.
Nur Yamankaradeniz is one exception. She designs high-priced gowns studded with Swarovski crystals for conservative Muslim women as well as their secular counterparts.
"A covered person should not be scary, she should look nice," Yamankaradeniz said. "We are trying very hard to get them to accept this."
Yamankaradeniz herself was dressed in a black trench-coat, with a lavender blouse, a brown paisley-patterned headscarf, and a gold watch studded with diamonds.
One of the few Muslim models hired to stride the catwalk here is Alfina Nasyrova, a woman who wore a midriff revealing t-shirt as she did her make-up backstage.
"In these clothes, you are feeling so clean, so pure," she said, after changing into a blue-and-white striped full body Hasema swim suit.
Asked whether she would wear a Hasema to the beach this summer, she answered, with a laugh, "Normally, I wear a bikini."
Tweet
Pope Shenouda Article