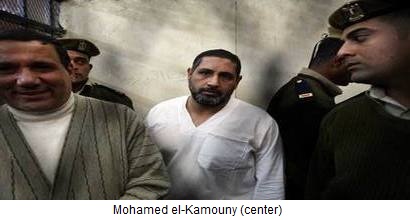 (AINA) -- Lawyers representing the Christian victims of the Nag Hammadi Christmas Eve massacre announced that they will request a change in the panel of judges at the Supreme State Security Emergency Court in Qena , due to the illegal measures taken by the court and the adjournment without reason of the trial.

The court session at the Qena Court started at midday on April 18, 2010 amid heavy security and was attended by the media. The three defendants, Mohamed el-Kamouny, Qurashy Abu-Haggag and Hendawy Hassan, pleaded not guilty. Qurashy, who had previously testified that he was present with el-Kamouny in the car during the shootings, has retracted his testimony, claiming that it was made under police pressure.
Shortly afterwards, the presiding judge, Mahmoud Al Husseiny, postponed the trial for the third time, until May 16, without any of the parties requesting an adjournment. The court also announced two serious decisions, namely, that lawyers representing the victims would be barred, and only the defendants' defense would be allowed to attend the future court sessions. In addition, relatives of the victims, the media and the NGOs would also be barred from being present at court.
Dr. Awad Shafik Awad, Coptic team member told Katiba Tibia News "I am stating it openly, the presiding judge, Mahmoud Al Husseiny, is not fit at all to rule over this case. If we cannot change him through the courts, we will do it through the media, nationally and internationally."
He said that the case has been dragging on for 4 months, while the death penalty should have been given by the court from the very first session, especially that for the second time forensics examination has confirmed that the bullets retrieved from the bodies of the seven dead victims and the seventeen wounded in the Nag Hammadi Christmas Eve Massacre came from the automatic weapon use by the defendant Mohamed el-Kamouny in the crime. "The judge procrastinates all court measures, meaning that we have come back to square one in the trial," said Dr. Awad. "We cannot accept more postponements. This is not acceptable at all."
Coptic team attorneys are angry because the defense asked the court to bar them and the court accepted. "The judge took this decision of barring us from attending the court sessions in our absence, which is completely illegal," said Coptic attorney Maged Hanna Kirrollos. "We either change the court or we will sue the district chief for issuing this flawed decision."
Commenting on this decision, Awad said "Nabih el Wahsh, the No.1 attorney in defense of el-Kamouny, does not want us to attend, they want to cook the case alone together."
Many observers accuse the presiding judge of conspiring with the defense to delay the case, prompted by some tactics used by the Islamist attorneys of creating havoc in court.
At one time the court erupted into chaos after Nabih el Wahsh, assaulted Coptic lawyer George Sobhy inside the court, by hitting him on the mouth. In another instance, El-Wahsh started what appeared to be a pre-arranged quarrel with one of his colleagues, in order to get a court postponement until after May 4, "because they have a litigation in front of the high administrative court on that day, in which they requested the transfer of the Nag Hammadi case to a normal criminal court and not a State Security one," said activist Janet Abdelallim to Coptic News Bulletin "This way they would have a free hand in the case to turn it into any direction they want."
In an interview with Al Mehwar Egyptian TV, Nabih el Wahsh said frankly that he was please that the "deal was successful," meaning the agreements he reached with the judge (video).
Activist Fathi Farid, who was singled out by the presiding judge to be thrown out of court, criticized the judge for "obviously following instructions from Security. This country is not ruled by law, but by State Security and they can make the trial go on for 10 years and still look like a 'just' trial."
Coptic attorney Dr. Ihab Ramzy told Al Mehwar TV the court's decision to bar the lawyers representing the victims of Nag Hammadi came as a reaction to the request of change of the court panel at Farshout "due to bias," presented the day before by the defense team of Girgis Baroumy, the Copt accused of allegedly having sexually assaulted a Muslim minor girl in Farshout in November 2009. The trial of Baroumi is adjourned until further notice (AINA 4-10-2010).
Those who are well acquainted with the Egyptian justice system are not surprised at the postponement, they believe that the court in Nag Hammadi is awaiting an indictment of Girgis Baroumi, in order to give al-Kamouny a lighter sentence or even an acquittal. Al-Kamouny and the Egyptian authorities claim that the alleged rape in Farshout sparked the massacre of the Christians in Nag Hammadi, as they came out of church after celebrating the Coptic Christmas Eve on January 6, 2010 (AINA 1-7-2010).
"Where is the justice done for the blood of our boys," said Dr. Awad, who is an international attorney based in Switzerland and President of the Confederation of Coptic Human Rights Organizations in Europe. "If the Egyptian courts cannot give justice to our sons, the victims of Nag Hammadi, then we will take the case to the international criminal court. I have declared this openly to all the media and to the State Security."
Outspoken Coptic activist Wagih Yacoub said: "We demand from the Egyptian State with all its organs, including the President, to stop all conspiracies against the Copts and their rights, to put to sleep the Nag Hammadi case and send it to oblivion." He said that the Copts will never forget the blood of the victims and will not accept that the Nag Hammadi massacre would have the same fate as Al-Kosheh Massacre of 2000, when 21 Copts were slaughtered in cold blood and not one Muslim was indicted. "The Copts will not accept less than the death penalty for the murderers," he added.
Tweet
Pope Shenouda Article