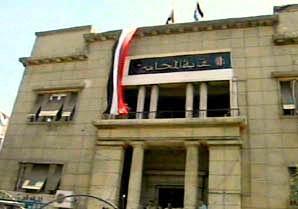 CAIRO: The Freedom Committee of the Lawyers’ Syndicate filed a case to General Prosecutor Abdel Meguid Mahmoud against ruling party MPs Nashaat El-Qassas and Ahmed Abou Aqrab, charging them with inciting murder, according to news reports.
Last week, El-Qassas, Abou Aqrab and Ragab Helal Hemieda condemned the “kindness” of the Ministry of Interior when dealing with protestors calling for change, suggesting that police should “shoot” protestors.
Earlier this week, the April 6 Youth Movement also filed a complaint against the “bullet MPs.”
Speaking in Daqahliya, Gamal Mubarak rejected propositions by the three MPs, saying that such comments give opponents a reason to attack the NDP, according to news portal Masrawy.com,
At a joint meeting Sunday between the human rights and the national security committees at the People’s Assembly (PA), El-Qassas said, “If it was in my hands, I would interrogate the Minister of Interior for his kindness when dealing with those outlaws.”
The committees had convened to discuss the recent protests by democracy advocates and the violent police crackdown on them.
“Shoot them and use the bullets on all the protestors that are breaking the law,” El-Qassas said at the time, and later said his comments only pertained to “those who break the law.”
According to Article 72 of the penal code, anyone who directly incites murder could face criminal charges.
Clashes broke out at the meeting between Aqrab and MP Mohamed El-Beltagy, a member of the Muslim Brotherhood bloc, when the former claimed that the MB had fabricated reports of violence during the protests for media attention.
El-Qassas blamed the media for allegedly fuming the public by misunderstanding his statements.
On popular talk show “48 Hours” on Mehwar TV station on Thursday, editor of Sawt Al-Umma Wael El-Ebrashi said that independent media fishes for mistakes in order to come up with solutions, according to Masrawy.
During the same episode, presenter Sayed Ali referred to the incident as an act of “political hypocrisy.”
In an aired telephone interception, Mohamed El-Damaty of the lawyer’s syndicate said that the MPs made the comments in public which is legally considered proof. He also called for lifting their parliamentarian immunity.
On Tuesday, the April 6 Youth Movement filed a complaint to the general prosecutor against El-Qassas and Abou Aqrab, also calling for lifting their parliamentary immunity and charging them with inciting murder, according to Mohamed Adel, blogger and member of the movement.
Adel denied reports suggesting that the movement is taking legal action against ruling party MP Abdel Rehim El-Goul, however.
“We will not lower ourselves to his level,” Adel told Daily News Egypt.
El-Ghoul reportedly lashed out at the movement and called on the police forces to use violence against its protestors.
Meanwhile, the Egyptian Organization for Human Rights (EOHR) called on head of parliament Ahmed Fathi Sorour to open an investigation in the case of the “bullet MPs.”
On EOHR’s website, director Hafez Abou Saeda said: “The angry reaction of the Egyptian public to the comments by MPs was expected. This reaction was based on fear that these suggestions will turn into orders to the police to start using violence and weapons.”
“There is a big difference between dealing with illegal assembly and peaceful demonstrations,” continued Abou Saeda, adding that shooting protestors is a crime, putting both the perpetrators and the ones who called for it before the law.
On Tuesday, April 20, some 50 demonstrators took part in the demonstration outside the PA, holding up placards reading “shoot us.”
Al-Ghad party’s Ayman Nour called for the lifting of parliamentary immunity from the two MPs who made the statement in order to allow for their prosecution on charges of incitement to murder.

“We are waiting for a response from Fathi Sorour. Is parliament for or against this crime? If it is against it, it must allow us to take legal steps,” Nour told protestors who gathered outside the PA.