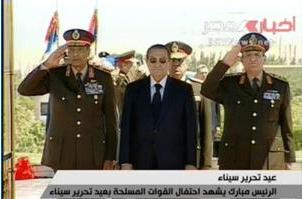 President Hosni Mubarak Saturday pledged to hold fair elections and welcomed any "societal interaction" but warned against what he described as setbacks.
In an address marking the 28th anniversary of the Sinai Liberation Day, Mubarak said: "Nationas' future is not made by slogans, nor is their destiny fulfilled by miscaculated steps."
Egypt will hold parliamentary elections later this year, and presidential vote next year.
In his televised address, Mubarak said that Egypt was doing its best to create an indpendent Palestinian state with eastern capital as its capital.
Tweet
Pope Shenouda Article