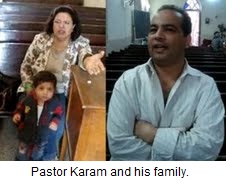 (AINA) -- An Anglican Church pastor and his wife were assaulted by Security agents in Luxor on March 18, 2010, in order to evacuate them by force from their home and demolish Church property. Out of the nearly 3000 sq. meters of buildings attached to the Church, only the 400 sq. meter prayer hall was left standing.

Pastor Mahrous Karam of the Anglican Church in Luxor, 721 km from Cairo, said that the Church was still in negotiations with the Luxor authorities the day before regarding a replacement for the community center building which lies within the Church's compound, and was told the authorities were still considering their options. Early next morning, a 500-man force of Central Security and State Security blocked all roads leading to the Church compound, forced their way in and broke into the pastor's residence, dragging the family out by force.
In an effort to save the buildings from demolition, the Pastor sat on the fence of the Church compound, to prevent the demolition work, but was beaten and dragged away, reported Katiba Tibia News. 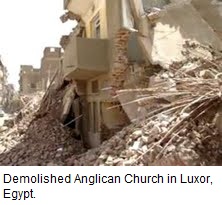 The Pastor's wife, Sabah, said that two men went into her flat and evacuated her by force, by slapping her face, pulling her by her clothes and dragging her by her hair. "They threatened that if I do not leave the place they would take my 3-year-old boy and throw him under the bulldozers which came for the demolition work," she told Sherif Ramzy of Freecopts. "Twenty traumatized children were dragged out of the attached nursery and thrown into the church hall," Sabah said.
She added that all their belongings were left in the street, and they have nowhere to live. "I believe they wanted to give us an Easter present, the way they gave the Copts of Nag Hammadi the Christmas Eve Massacre," she added bitterly.
Pastor Karam said that the community center lies within the archaeological excavation for the "Rams Road" project. "We are not against giving the community center up, we just want a replacement building," he told Luxor-based Coptic activist Samir Rafaat. "We want equal treatment in our own country. The city council replaced the Islamic Association with a building of 20 flats, before demolishing their building. We want the same treatment."
Dr. Samir Farag, Governor of Luxor, told the media that his forces seized only "one room" from the Anglican Church, and denied any bodily assault on the pastor's family. According to the Anglican Church approximately 2600 sq. meters were seized including the pastors 2-story high residence, and the community center, which included a nursery, guests quarters and club The Anglican Church School, which was also demolished, was not included in the negotiations between the Anglican Church and the Governorate as it does not lie within the Ram Road excavation project. 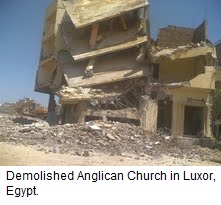 An Anglican witness said: "The Governor is lying, that is why the forces blocked the road leading to the Church before their attack, so that nobody would witness their doings. But he forgot there is the Internet and cell phone videos to show the whole world the uncivilized way Egypt deals with Christians and their places of worship."
The Anglican Church in Egypt, which has a congregation of nearly 750,000 issued a statement on March 19, condemning the behavior of the Luxor authorities for demolishing Church property without adequate negotiations. It also condemned the assault on the pastor, his wife and the threats made to harm their child, which it characterized as a flagrant violation of human rights and the sanctity of churches as places of worship.
Pastor Karam told Samir Raafat "We want a replacement plot of land for the one seized, as previously promised by the Governor, to build a community center on. Secondly, I was beaten and dragged on the ground in front of everyone, so I need my honor to be restored, because I represent the Anglican Church." He said he would stage a sit-in in front of the church until matters have been rectified. "Meanwhile I will not carry out any Church services."
The governor of Luxor has been criticized on several occasions for his execution of projects in Luxor. According to writer Safwat Samaan Yassa, UNESCO recommended that the excavation work for the Ram Road should be executed in stages in the next 20 years, but the Governor of Luxor shortened it to three years, demolishing in the process hundred of houses, hotels, restaurants, bazaars, and ancient palaces and thereby destroying Luxor's economy. Furthermore, according to Yassa, historical sites were demolished to make way for a hotel complex financed by Arab investors.
Tweet
Author

The Ministry (14):While in the ministry