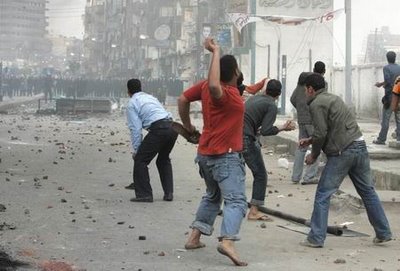 Egypt (AINA) -- At 17:00 hours on Friday a Muslim mob attacked a Christian congregation during prayers in the church attached to the services building of the Coptic Church in the Rifeyah area of the Mediterranean seaport of Mersa Matrouh. The mob, estimated to be between 2000-3000 of Bedouins and fanatical Muslim Salafis, hurled stones at the building. Four priests, the deacons and 400 parishioners were trapped inside the building.

Rev. Matta Zakarya told activist Wagih Yacoub of Katiba-Tibeyah, an advocacy group, that after the mob hurled stones at the building, they went inside and assaulted the people, mostly families. Neither the security forces nor the fire brigades were sufficient. Only two fire brigades were available. Witnesses said the number of security forces was not enough to contain the Muslims, and tear gas was used against them.

The attack in casualties among the Copts and security forces, mostly head injuries caused by hurled bricks. The injured were treated at Matrouh Hospital. According to Rev. Matta, twenty-five persons were seriously wounded, including women and children. Eighteen houses, twenty-two shops and sixteen cars were destroyed and burnt down. "Twenty-eight people have no homes and had to seek refuge in the services building," said Rev. Matta.

Security forces enforcement from Alexandria arrived in the early hours of Saturday, and escorted the 400 Copts held in the services building to their homes.

The pretext used by the Muslims for this attack was the erection, without permission, of a wall surrounding the plot of land acquired by the Church adjacent to the services building. "The violence started after the Muslim evening prayer," said Rev. Matta Zakaria to Coptic News Bulletin, "when the Mosque's Imam, Shaikh Khamees, talked of the need to fight the 'enemies', and said 'we don't want Christians to live among us.'"

The mob moved on to other areas not protected by security, vandalizing and torching Coptic homes, shops, businesses and cars in the streets surrounding the services building. "They were chanting religious and Jihadi slogans, during which they vandalized and burnt houses and shops, amid the cries of the terrorized Copts," reported Nader Shukry of Freecopts.

Copts whose relatives were held inside the services building, gathered in front of the State Security in Matrouh to protest the attacks on them and the delay in the arrival of the security forces to protect them.

Rev. Matta said that a meeting is to be held in the morning of March 13, between the Church, the State Security and the Muslim elders in the area, "Because the Copts are frightened, especially the women and children who were indoors as the Muslims torched their homes and who are now extremely traumatized. Everyone needs re-assurance that such an attack will never happen again."

The services building, called Archangel Michael Charity, which serves 300 Coptic families, was demolished (AINA 4-30-2009) by security forces on April 26, 2009, under the pretext of questioning the ownership of land, but the matter was later clarified and a license for the construction of a replacement services building was obtained from the Governor of Matrouh.

To make ready a people prepared for the Lord." (Lk 1: 17) How beautiful are these words uttered by the angel of the Lord when announcing the birth of John the Baptist: "He will also be filled with the Holy Spirit, even from his mother's womb. And he will turn many of the children of Israel to the Lord their God. He will also go before Him in the spirit and power of Elijah …