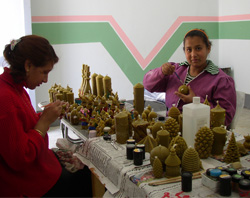 (CNA).- The Catholic Charity Aid to the Church in need (ACN) reported on Wednesday that they are helping fund a new center for the mentally disabled in Egypt. The new facility will allow for those who minister to the disabled population to leave their current center in the dessert.
Magdi Asham Henein, a member of the Al-Fulk community in Minia, Egypt, thanked ACN profusely on Wednesday, saying “We cannot integrate people into society if we are living in the desert – and with the help of ACN we have bought the land for the new community building.”
Aid to the Church in Need has already provided over $20,400 and pledged further assistance in the construction of the new facility. Underscoring the importance of his community's work, Henein explained that “10 years ago people were rejected in society, nobody understood the nature of mental handicap – it was seen as a punishment from God.”
In addition to often being thrown out and rejected by their families, “Mentally handicapped people were suffering a lot in society – many were living in the streets, and passers-by would make fun of them,” Henein said. “They were completely marginalized.”
The Al-Fulk community, who's name means “the Ark,” has helped provide a workshop in Minia, where people with mental disabilities can make candles and receive payment for their labor. Henein said that the new facility will not only continue this work but will also “create some kind of social life for the residents with mental disabilities – they like to buy things from shops and to visit people,” he explained.
Al-Fulk, which was founded in 2002, is affiliated with L’Arche international but is overseen by the Coptic Catholic Diocese of Minia.
“The changes in their lives are a sign of resurrection,” Henein continued, saying, “they were completely marginalized but now they have changed, a resurrection has taken place for them and for their families.”
“Society has changed its attitudes, so there is a resurrection both for the person and for the wider society.”
ACN called the Al-Fulk group a sign of unity since there are members of the Catholic and Orthodox faith who live and work together. The community hopes that Muslims will soon be a part of their effort as well.
“Muslims are the majority,” said Henein, “but our work is not widely known and Muslims can be suspicious of it.”
“But in the future,” he noted, “Al-Fulk could be a bridge bringing Muslims and Christians together – as other social activities of the Church manage to do
Tweet
Pope Shenouda Article