WCC Message of Solidarity to Christians in Egypt 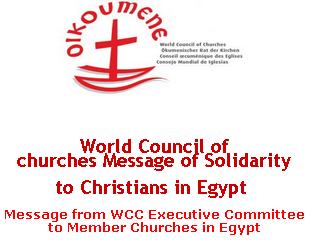 Concerned about the security of Christians in Egypt, the World Council of Churches (WCC) has encouraged the churches in the country to continue their involvement in Muslim-Christian dialogue."
It is a matter of regret that in Egypt today Christians can easily fall victim to violence and hatred, and that their security is not fully guaranteed. Many Copts, in particular, are made to feel like aliens in their own country."
This statement is part of a message to the member churches of the WCC in Egypt issued by the Council's executive committee at the end of its 23-26 February meeting in Bossey, near Geneva, Switzerland.
In one of the latest attacks targeting Christians in Egypt, six Christians and one Muslim were shot down by gunmen at the conclusion of the celebration of a Coptic Christmas midnight mass in Nag Hammadi on 7 January.
The WCC message conveys "the concern of the entire ecumenical family" and affirms "unequivocal support to the churches in Egypt in these troubled times".
The message also encourages the churches in Egypt "to continue to counter negative trends with a pro-active engagement in dialogue and partnership for life and for Christian-Muslim coexistence".
Full text of the WCC executive message to member churches in Egypt
WCC member churches in Egypt
The World Council of Churches promotes Christian unity in faith, witness and service for a just and peaceful world. An ecumenical fellowship of churches founded in 1948, today the WCC brings together 349 Protestant, Orthodox, Anglican and other churches representing more than 560 million Christians in over 110 countries, and works cooperatively with the Roman Catholic Church. The WCC general secretary is Rev. Dr Olav Fykse Tveit, from the [Lutheran] Church of Norway. Headquarters: Geneva, Switzerland.
Tweet
Pope Shenouda Article