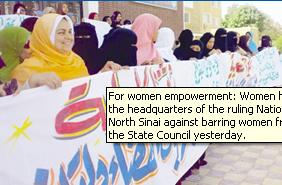 WOMEN in Cairo and other cities of the nation yesterday protested against a decision by the State Council court to bar women from working as judges at this influential court.
For women empowerment: Women holding a protest outside the headquarters of the ruling National Democratic Party in North Sinai against barring women from becoming judges at the State Council yesterday.
Around 150 women protested outside the General Secretariat of the ruling National Democratic Party (NDP) in central Cairo, holding banners that decried the decision.
"Women's rights are guaranteed by the Constitution. Discrimination between women and men should become something from the past," one of the protesters said.
The State Council voted by sweeping majority (318/319 votes) last Monday to bar women from being judges in the council, in a move that triggered to a torrent of criticism by internal as well as external human rights activists.
Aisha Abdel-Hadi, the Minister of Manpower and the secretary of women at the ruling party, condemned the decision taken by the general assembly of the State Council not to allow women to work as judges.
"This is a move to hinder the progress of women and getting their rights," Abdel-Hadi said in a statement yesterday.
"Women proved great efficiency in all posts. It's unfair to deprive them from the State Council," the statement said.
“While we could not intervene in the affairs of the State Council, we ask the respected council to review its decision as a bid to support women empowerment,” she added in the statement.
In the coastal city of Alexandria, dozens of women took to streets against the decision and asked for “complete equality” with men in all fields.
"Women judges could be a great addition to the judiciary and society," said Rania Bayoumi, the women secretariat of the ruling party in Alexandria.
She added that democracy and prosperity could not prevail in a male-dominated society.
In North Sinai, 300 women protested against the decision, which they described as a slap in the face to women judges who are already working in the Prosecution and the Constitutional Court. A massive protest by pro-women groups are expected today outside the headquarters of the State Council in Cairo.
Since its establishment in 1946, the State Council has become the only court that has the authority to give rulings on administrative disputes related to the punitive lawsuits whether those related to cancelling administrative decisions or advising public entities on diverse aspects of public law such as administrative contracts, tenders, and ministerial decrees.
Tweet
Pope Shenouda Article