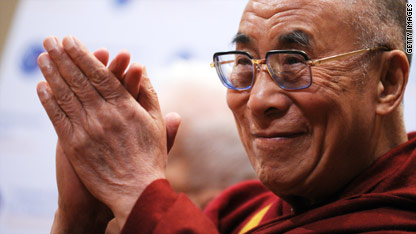 (CNN) -- China is "denying there is a problem" between its government and Tibet, the Dalai Lama says.
In his first interview since his recent controversial meeting with President Obama, the spiritual leader of Tibet told CNN's "Larry King Live" that China claims Tibetans are "very happy ... much, much, much better than previous Tibet."
However, he noted that his Tibetan government-in-exile has received information indicating "suppression ... or restrictions" culturally and religiously of the Tibetan people.
China rejects Tibetan claims of independence or greater autonomy and claims sovereignty over the area.
But the Dalai Lama, who lives in exile in India, told King that Tibetans "are not seeking independence."
"That's why we are called middle way," he said. "We complain [about] the presence of policy in Tibet. It is actually very much damaging. ... But [on the] other hand, we also do not want separation from China because ... Tibet [is a] landlocked country, materially backward. Every Tibetan want modernized Tibet, so for that reason, [we] remain within the People's Republic of China."
The Dalai Lama met with Obama on Thursday despite strong objections from Chinese government officials. The meeting threatened to further complicate Sino-U.S. tensions, which have been rising in recent months. China warned it would damage Beijing's ties to Washington.
Beijing regards the Nobel Peace Prize laureate as a dangerous "separatist" who wishes to sever Tibet from China.
"Larry King Live"
The Dalai Lama told King he first met Obama when the future president was a young senator on the Senate Foreign Relations Committee.
He was a "very impressive, young politician then," he said of Obama.
"As soon as he become president, we had some sort of contact," he said, indicating that Obama expressed sympathy toward Tibet's plight. However, a meeting was postponed due to sensitive talks Obama was conducting with Chinese leaders.
"Now this time, despite some difficulties, we had that meeting and [it was a] very pleasant one," he said.
The Dalai Lama said he discussed three priorities during the meeting with Obama: "the promotion of human value in order to create a better world," the promotion of religious harmony and his desire for modern education for Tibetan children.
He called Obama very receptive to his priorities.
Asked whether he thinks often of his homeland, the Dalai Lama said he occasionally conjures up memories of his childhood in Tibet. But after more than 50 years in India, "my body [is] supported by Indian rice and Indian dollar," he said.
He sought to deflect attention away from his exile, saying "this is not our concern. Our concern is 6 million Tibetan people's basic rights and culture. These are our main issues."
As a Buddhist, the Dalai Lama spoke often during the interview about the concept of love and peace.

Asked whether he has love for the Chinese, he answered, "Certainly. We have to practice that." He admitted to "some irritation" with Chinese hardliners, but insisted they are "small moments."