A Season of Bright Sadness 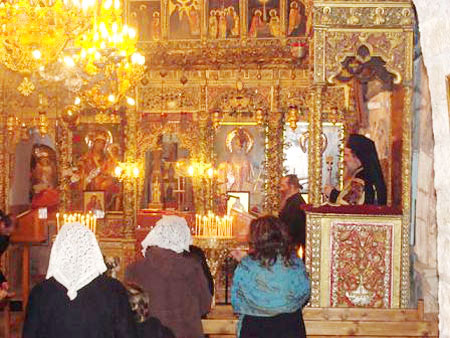 Many Christians in the west, Catholic and Protestant, are familiar with the penitential season preceding Easter that is known as Lent. But the observance of this season is unusually elaborate among the Orthodox Christians of the east, and unfamiliar to most outsiders.
In the Orthodox Church, Lent is first and foremost a liturgical period. In other words, its most important components are the liturgical texts and services that are sung throughout the season. The collection of Lenten liturgical material is known as the Triodion, and it is actually first brought out and used three weeks prior to Lent proper.
Having completed these three weeks of preparation, Orthodox Lent begins not on Ash Wednesday but on Clean Monday. On this day, observant Orthodox Christians begin the most obvious part of the Lenten season –fasting. An Orthodox fast consists of abstinence from meat, eggs, dairy products, fish, wine and oil. It is a diet that the Orthodox should be accustomed to, as it is also kept on Wednesdays and Fridays throughout the year, and during Advent and other liturgical seasons.
The Lenten fast, however, must never become a source of pride on the one hand, or something oppressive on the other. It is a measuring stick for our individual practice. If we keep it faithfully, we must say: "We are unprofitable servants: we have done that which was our duty to do" (Luke 17:10). If we fall short of the standard for any reason, we must reproach ourselves and try to do better. Fasting is primarily about obedience, and thus humility. But it also creates a sense of need and sobriety. It teaches us to seek our consolation in things of the spirit rather than of the flesh.
For fasting, even undertaken in the right spirit of humility, is merely a physical accompaniment to the real heart and joy of Lent: the prayer and worship that are intensified during this season, with some churches holding several services throughout the week. The centuries-old texts of the Triodion, full of poetry, meditation, and profound truth, are among the greatest treasures of the Orthodox church. It is here that we encounter what the influential theologian Fr Alexander Schmemann has called the "atmosphere", the "state of mind, soul, and spirit" which is to permeate our lives and which he calls "bright sadness" – a poetic translation of the "joy-making mourning" recommended by Saint John Climacus in his Ladder of Divine Ascent.
The Triodion reminds us that we have fallen short, that we are not the people we should be, that we have become entirely focused on aggrandising and sating ourselves, and as a result these ancient services engender a sense of sorrow. But the sense of freedom we experience as we relinquish this terrible self-centredness produces joy in our hearts. If we do not to some extent attain to this joy-through-mourning, we have entirely missed the point of Lent.
The Orthodox have not only this truth to offer their fellow men, but a concrete – indeed a beautiful – means of actualising it in our lives. But even if not all are able to come and participate in the enacting of the "bright sadness" of Orthodox Lent, it's still possible for others to ponder its wisdom. As long as there is evil in the world, we can be sure that some of it still lies hidden in our hearts. And as long as we are able to shed tears over our condition, there remains hope that we will one day see the glorious day of resurrection..
______________
The Guardian
Tweet
Pope Shenouda Article