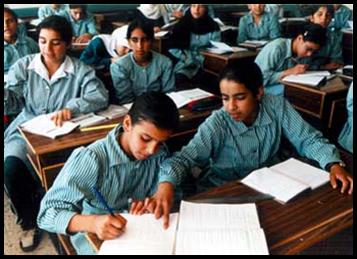 It is now almost a month since Ahmed Zaky Badr became minister of education. I pray that he would muster the required wisdom and courage to confront the severely flawed climate which dominates the Ministry of [so-called] Education. Anyone who imagines Dr Badr’s problems are limited to the by-now familiar overcrowded classrooms, insufficient school buildings, lacking play and activity space, or outdated school books, is seriously mistaken. The key problem with the educational process today is the stagnation and isolationism which overwhelm it. This dictates a need to reform the current curricula, to rehabilitate the teachers, and to purge the entire system of the religiosity that has come to dominate all its cadres—the curriculum designers, the teachers, and the examiners.
I am confident Dr Badr possesses a vision for modernising Egyptian education to go back to its original role of stimulating the mind. An end should be put to the disastrous practice of rote learning and stereotyping which ought to be replaced with discussion, doubt, research, and critical thinking. This should serve not only to enhance the learning experience, but also to foster a climate of democratic practice in class.
Not to be ever overlooked is the enlightenment aspect of the educational process. A grim reality in our daily life is that the Ministry of Education is farthest than ever from any educational or enlightenment role. It would more aptly be called the ministry of ignorance or darkness. Anyone who embarks on the task of scrutinising the school books, curricula, and teaching methods will be appalled at the multiple forms of sidelining the mind in favour of indoctrinating children in blind religiosity and discrimination. The most recent sample of such practice came some two weeks ago in the form of an examination question sheet brimming with crude bigotry.
The question sheet was that of the mid-year examination in art education for students of the first preparatory year in Abu-Hommos in the west Delta governorate of Beheira The exam came in two versions, one for day students and one for evening students. The first question required the 13-year-old day students to draw a scene of the pilgrims surrounding Mount Arafat “where they stand in their ihraam garments with raised hands praying to God”. The evening students were required to draw a scene of the Mulid al-Nabi (Birthday of the Prophet Mohamed), depicting the mosques decorated for the occasion and the suqs with the traditional sweetmeats.
The second question was on innovative design and required the day students to draw the Kaaba on a 20 x 25cm space, using in the design the words “There is no god but Allah and Mohamed is His prophet”. The evening students were asked to draw, in the same space, a New Year calendar depicting mosque minarets and domes.
I draw my readers’ attention to the fact that this was an exam in art education not in Islamic religion. Muslim and Christian students alike are required to answer these questions. So what is the purpose of ‘religionising’ the questions and endowing them with an Islamic hue that has nothing to do with art? Non-Muslim students are bound to find the required scenes alien and difficult to envision. They have nothing to do with painting or design. It is a very obvious case of what the National Council for Human Rights termed “embracing the religionisation of every aspect in the educational process, and presenting one religion as superior to all others. This carries flagrant overtones of discrimination and alienating the ‘other’.”
Does Dr Badr realise the disastrous situation in his ministry? And does he realise that he has before him the daunting task of prying the ministry out of the clutches of those who foster ignorance and darkness?
Tweet
Author