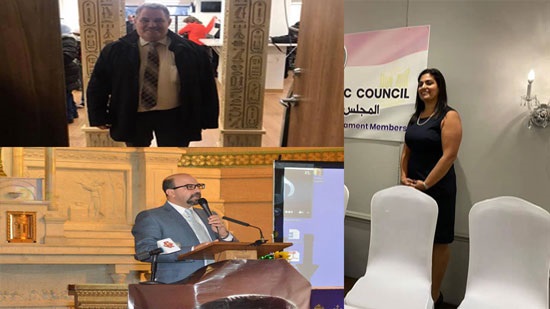 The American Coptic Council is established in New York

A group of Coptic activists in the United States of America established the American Coptic Council in New York, with the official presence of the Egyptian embassy, parliamentarians, and a number of Coptic leaders in America. The council aims to support Egypt and provide a diverse vision on a number of issues related to the economy, citizenship, and representation of Egypt abroad by providing a realistic picture of Egypt after the June 30 revolution. The Council was established by Dr. Joseph Ibrahim, Dr. Ashraf Ashamallah, Irene Bakhit and Michael Lyon.

Bishops Angelos and Gabriel offer condolences on the death of Mubarak

Bishops Angelos of Shubra and Gabriel of Austria visited the Ambassador of Egypt in Austria Omar Amer to offer condolences on the death of former president Hosni Mubarak. A military funeral was held to the former president who was leader of the Air forces during the war on 1973 and the state of general mourning was declared in Egypt for 3 days. 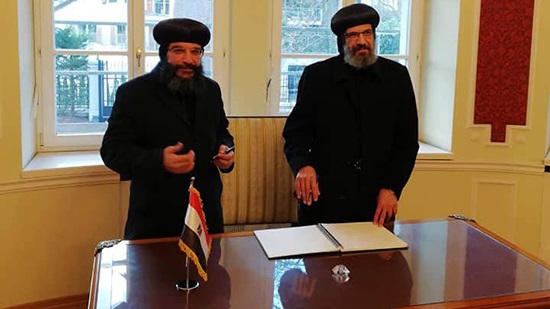 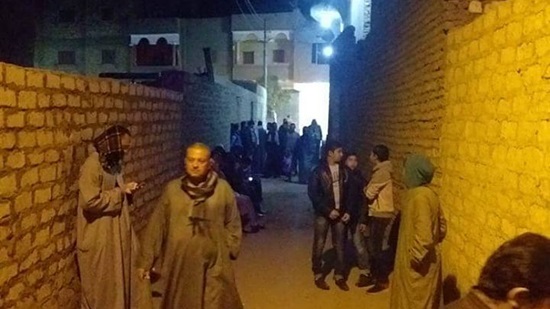 After holding a reconciliation session between Muslims and Copts, 2 Copts and 6 Muslims were released in Faw village in Dishna. The sectarian attacks dates back to the New Year s Eve when extremists attacked houses of Copts in protest of holding Christian prayers.

Bishop Makarious of Minya received yesterday Mr. Jeffrey Adams, Ambassador of England to Cairo, who visited the path of the holy family in Minya with his wife. During the visit, Adams strengthened the importance of the province, its history, and archaeological value. 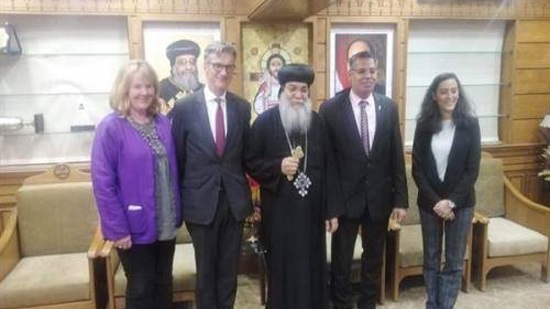 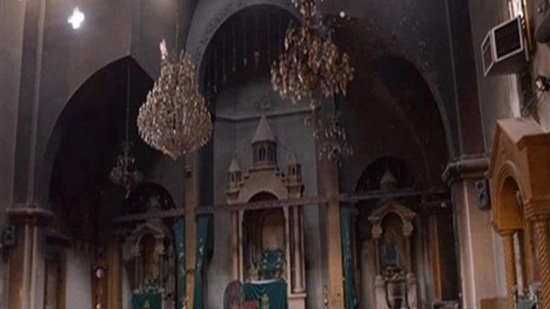 Giza court issues final verdict next April 12 on 9 defendants who were accused of attacking the church of Kafr Hakim and killing 11 police officers in Kerdasa police station. The defendants were sentenced for life imprisonment while they were fugitive, and their trial was repeated after they were arrested.

Islamic preacher prevented from preaching during being investigated for

Dr. Ahmed Abdel-Raouf, head of the Central Administration for Monitoring and Evaluation at the Ministry of Awqaf, stated that Sheikh Abdullah Rushdie repeated irregularities have been referred to the competent prosecution, and added that the ministry has prevented him from preaching. The decision was taken until the end of the investigation of his controversial opinions and publications, which are seen as not appropriate for the preachers. It is wroth mentioning that Roshdie has recently declared that Sir Magdy Yacoub can’t enter heaven because of his good deeds since he is an infidel. 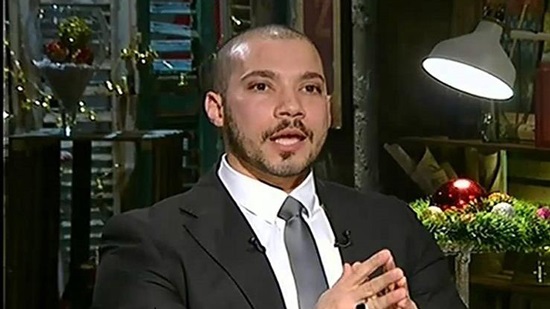 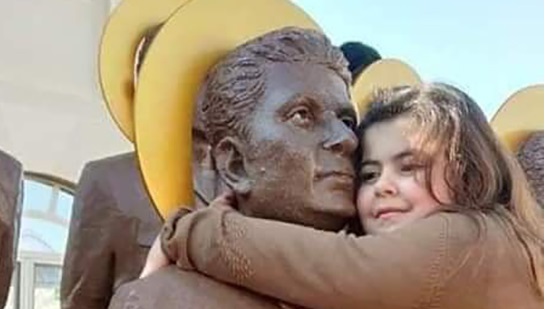 Social media has spotted the picture of Miven Malak, Daughter of martyr Malak Faraj who was slain by ISIS in Libya. She embraced the statue of her father and was very proud to see him as martyr who sacrificed his life for Christ sake.

Many times did we hear about the disappearance of Coptic girls, and many of them are linked to romantic relationships, bad circumstances and polarization, but other reasons were revealed by Coptic girls who reported about fake companies who claim to be owned by Christians and claim they cooperate with the church to find jobs for Coptic girls. The companies claim to have connections with monks and nuns and start collecting their personal information and talk to them on the phone and get manipulated by the deceitful people. 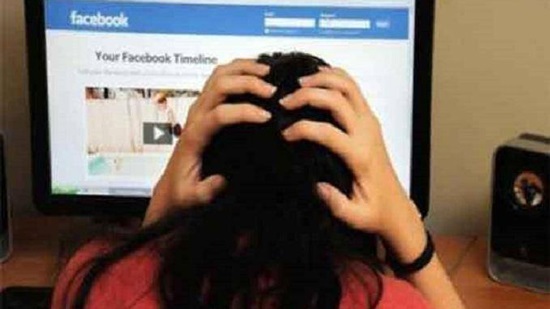 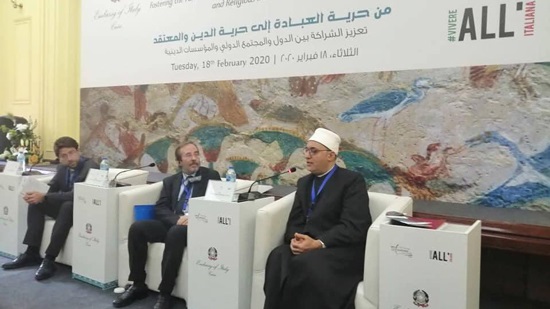 The Chaldean Church in Egypt participated at a conference about Freedom of Religion invited by His Excellency Mr. Gambolo Cantini, Ambassador of Italy, at the Italian Cultural Center in Cairo. The conference came as an extension of the Declaration of the Human Brotherhood Document signed in Abu Dhabi between His Holiness Pope Francis and the Grand Imam Sheikh Ahmed Al-Tayeb. The conference discussed ways of dialogue and common matters between religions in order to eliminate religious extremism and conflicts between religious groups.

The Faith and Faith Committee of the Diocese of Maghagha announced that HG Bishop Aghathon will host a weekly program entitled “Education and The Creed" and will be broadcast on Facebook. The program aims to present the correct teachings, and face wrong teachings, modern heresies, and misconceptions, which are spread widely in multiple places. The first episodes of the program will be broadcast in the begining of the Great Lent, on Monday, February 24, 2020. 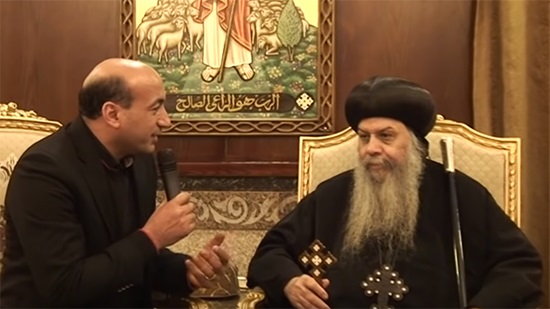 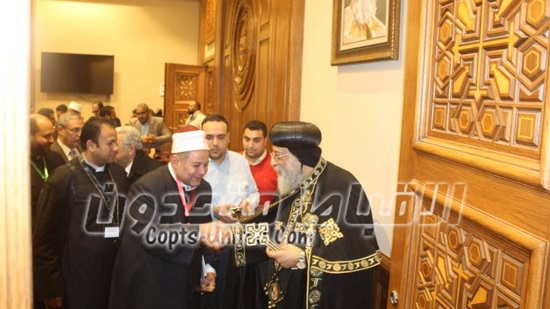 Pope Tawadros The coexistence of the Egyptians formed a wonderful global image of national unity Nader Shoukry the Copts of Egypt Tuesday, February 18, 2020 20:21 PM + 02:00 00 EET Pope Tawadros the coexistence of the Egyptians formed a wonderful global image about the national unity The Grand Imam and His Holiness, the Pope, are the best advocates of peace and love around the world. Books: Nader Shukri, His Holiness, Pope Tawadros II, met the Pope of Alexandria and the Patriarch of the See of St. Mark, today, at the Pontifical Headquarters in the Cathedral of Marxia in Abbasia, the delegation of the Egyptian family s house, within the activities of the training program organized by “House of the World” His Egyptian ", under the title" because I am a father ", in order to train 150 preacher and chaplain, from Al-Azhar and the Egyptian Church, the best ways to strengthen family bonding. At the beginning of the meeting, His Holiness Pope Tawadros welcomed the attendees, stressing that this meeting is a strong message for all those who think about damaging the unity of the Egyptian national fabric, explaining that the Egyptians coexistence on the good land of Egypt and their circumvention around the Nile River formed a wonderful image in front of the world about the true meaning of national unity . His Holiness Pope Tawadros emphasized that preserving the entity and unity of the family is a guarantee of the safety of society, as violence and terrorism that has spread around the world is originally the result of broken families that have missed the true role of the father and mother in education, explaining that we need to teach and teach the right parenting methods even We can keep our families from collapsing, because a stable family is an effective family that contributes to building society.

His Holiness Pope Tawadros II received Dr. Ahmed Okasha, former president of the World Psychiatric Association, and Dr. Victor Sami, professor of psychiatric and neurological diseases at the Papal headquarters in Cairo. During the meeting, they discussed how to raise awareness about the societal view of mental illness, and the importance of society accepting the idea that mental illness is a disease that needs to be treated since the Egyptian society refuses to accept it. They also discussed the role of the church to make such social change. 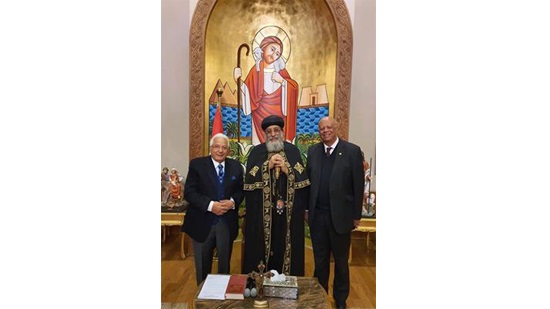 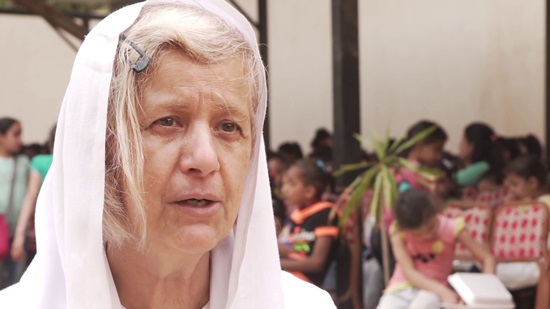 A number of local and international bodies, including the Canadian Parliament, decided to nominate the Egyptian lady Maggie Gibran known as the title Mama Maggie or Egypt’s Mother Teresa, to obtain the Nobel Peace Prize for 2020. Canadian Parliament Member Garnett Guinness announced his nomination of Mama Maggie for the Nobel Peace Prize this year, in recognition of her great efforts in establishing the Stevens Children’s Charitable Society and serving the poor in Egypt, as well as her active role in promoting a culture of diversity and acceptance of others. Maggie has helped thousands of poor children since she started serving them in 1985 and has received several awards for her great efforts.

Copts of Al-Karam village withdrew lawsuit before court holds hearing tomorrow. 25 people were accused in the attacks that took place in May 2016, before the scheduled hearing of the case tomorrow. The Copts of Al-Karam village agreed to reconcile fearing threats and revenge of the defendants. The court had sentenced three defendants to 10 years in absentia for stripping an old lady nude and dragging her in the streets to punish her son after a rumor about romantic relationship between him and a Muslim woman. 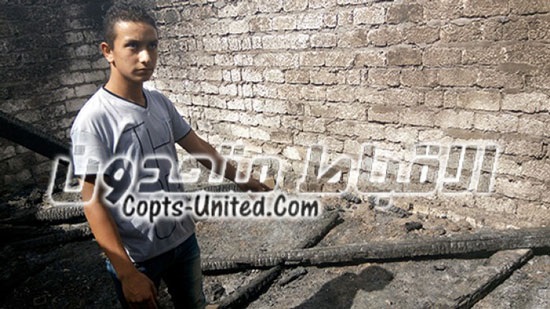 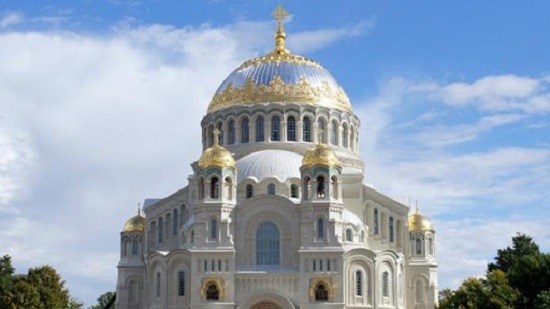 The Coptic Orthodox Church in the United States of America launched a questionnaire on the impact of social networking sites on the society. Father Abraham Azmi, Information Officer of the Coptic Church in America, said that the research is published by Holly Sophia University and distributed by Coptic World organization to find out which websites are more influencing the Copts, how Copts see theological discussions, and whether the individuals tend to be extreme on Social Media. 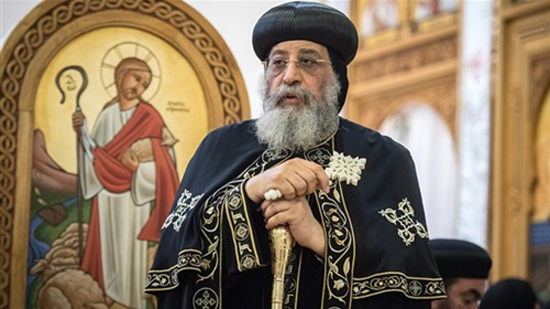 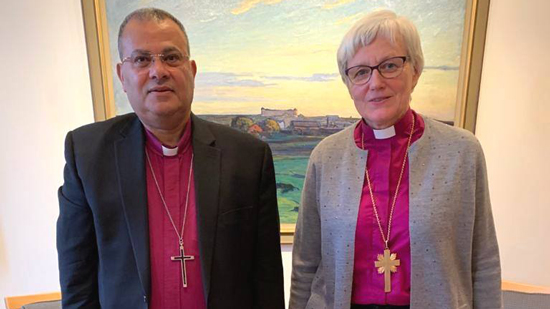 Dr. Reverend Andre Zaki, head of the Evangelical Community in Egypt and head of the Coptic Evangelist commission for Social Services, concluded his visit to Sweden and Germany, after meeting a number of prominent leaders in civil society and leaders of Arab Evangelical Churches. During his visit to Sweden, Zaki met Archbishop Antje Jackleen, Archbishop of Sweden, and discussed with him the most important conditions of the Arab region and the effective role played by Egypt in light of the challenges facing Arab Christians. He also met with the Ambassador of Interfaith Dialogue at the Swedish Ministry of Foreign Affairs MS Ulrika Sundberg. They discussed several issues including the challenges of the region and the positive role of Egypt as a model for coexistence. In Germany, Zaki met with the Director of the Middle East file at the Ministry of International Cooperation Dr. Claudia Warning, and Dr. Bernhard Felmberg, President of Civil Society and the Church Organizations.

Archbishop Markos of Shubra al-Khaimah opened the closed Church of Mit Nama that was closed by police last year. 87 deacons were ordained in the celebration and Father Habib Girgis was promoted to the rank of Hegumin. Extremists have refused to allow the church to build a service building though it optioned all due permits since 2001. 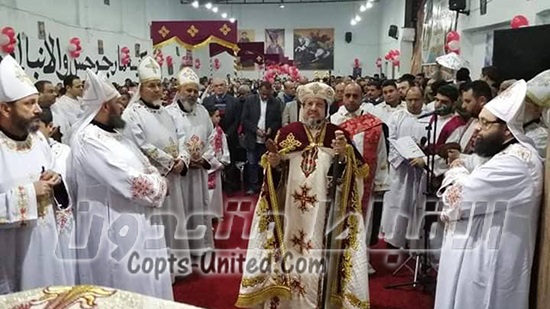 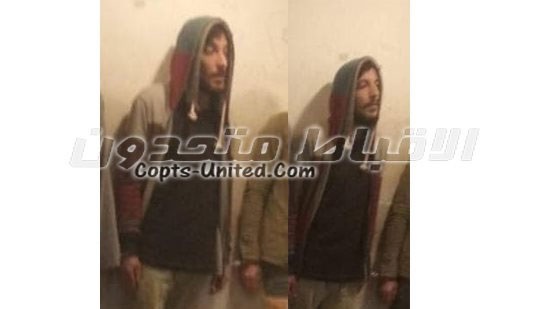 Extremist is arrested for slain attempt of Coptic man in Marj

Cairo Misdemeanor Court is holding trial of Muhammad Awad, 32 years old, on January 27 after he tried to slain a Coptic man in Marj, Cairo. The extremist assured he hates the Christians and tried to kill the Coptic man using a knife. This came couple of days after another slain attempt of a Coptic woman in Warraq, Cairo.

Bishop of Sharkia inaugurates the Church of St. George in Al-Sa’idah 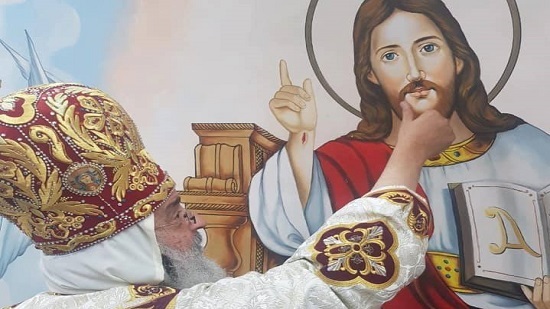 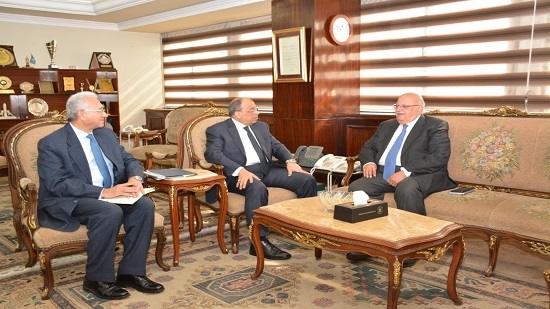 Major General Mahmoud Shaarawi, Minister of Local Development, reviewed the plan to develop the path of the Holy Family with the president of the Association for the Development and Revival of the Coptic Heritage. The plan will be implemented in cooperation with the Ministry of Tourism and Antiquities, the Council of Ministers, the Tourism and Aviation Committee of the House of Representatives, the Coptic Church, and some relevant authorities from civil society and the business sector.

President Mohamed Hosni Mubarak is one of the most prominent presidents of Egypt and for me he comes second after Nasser. His achievement can’t be ignored by history or the Egyptians. He is the leader of the air strike in the October war and worked hard to restore the Egyptian land till Taba in Sinai. On the side of the infrastructure, Mubarak has established more than 200 bridges that helped solving traffic pr