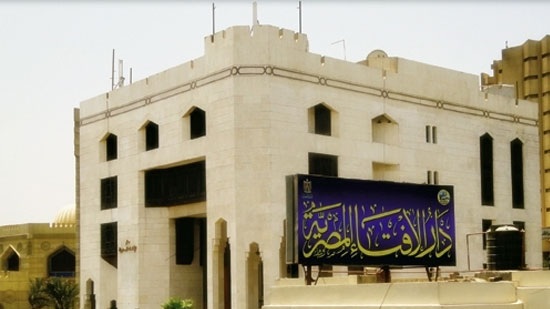 An Egyptian delegation is set to participate in a Wednesday meeting that aims to combat extremist thoughts and draft media strategies for the international anti-Islamic State group coalition in Washington, a statement by Egypt’s foreign ministry read.

Minya Prosecution on Wednesday has ordered the detention of eight suspects for four days pending investigations over the recent sectarian violence incidents that took place in the Upper Egyptian governorate, Youm7 reported. 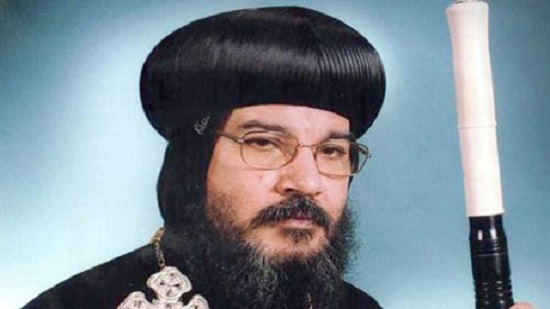 Anger is mounting amongst Minya's Copts after two incidents of sectarian violence, Bishop Macarius of Minya said in statements he made to Ahram Arabic website on Tuesday.

Egypt's Grand Imam, one of the world’s highest Sunni Muslim authorities, has urged western countries to review laws and regulations that may affect the freedom of Muslims after a train attack in Germany was claimed by the Islamic State group. 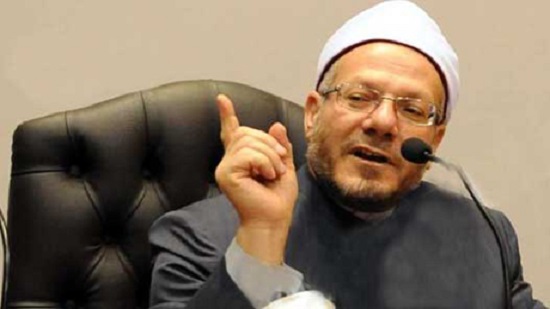 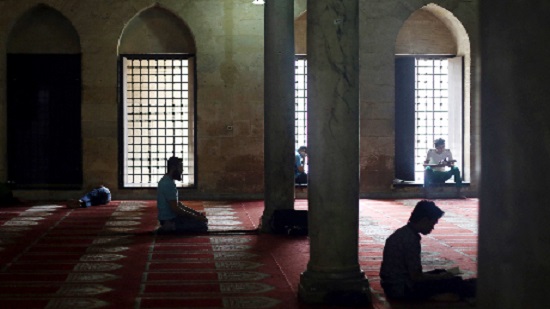 Egypt's government said it would not backtrack on its controversial decision to standardise sermons at Friday prayers, adding that scripted sermons would only be a "guideline" until a final endorsement of the move.

A week on: Al-Azhar scholars' objections to scripted Friday sermons

A week ago, government authorities announced the decision to make all mosque preachers deliver an identical, government-approved sermon during Friday prayers. The sermons are to be written by officials from the Religious Endowments Ministry and senior clerics from Al-Azhar. 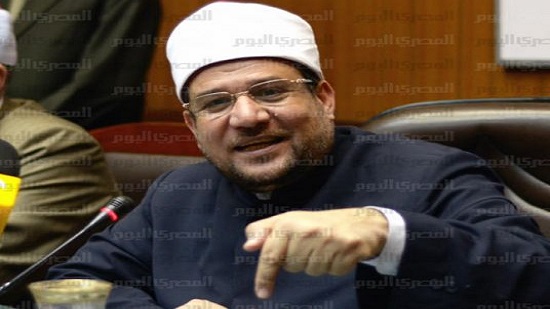 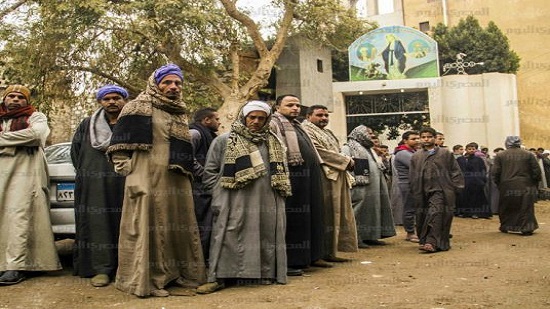 One killed, 3 injured in attack on Minya priests' families

One person was killed and three were injured on Sunday night when anonymous assaulters attacked the families of two priests in Minya governorate.

Coalition raids kill 21 civilians in IS stronghold in Syria: Monitor

Air strikes by the US-led coalition killed at least 21 civilians in and around a stronghold of the Islamic State group in northern Syria on Monday, a monitor said. 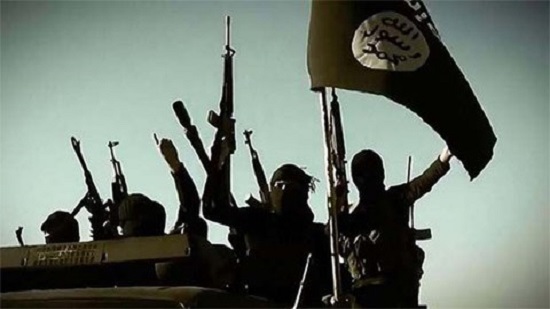 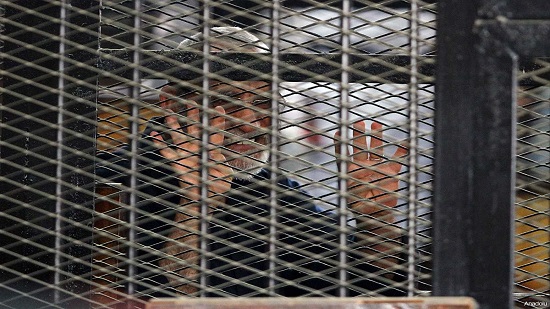 Mohamed Badie, the jailed head of Egypt’s outlawed Muslim Brotherhood group, said Thursday that he was in good health but that his family had been barred from visiting him in prison. Badie made the assertions at a criminal court in southern Cairo, where he – along with 682 others – face charges of having incited and committed “acts of violence” following a 2013 military coup that unseated Mohamed Morsi, Egypt’s first freely-elected president and a Muslim Brotherhood leader.

A Muslim mob in southern Egypt stabbed a Coptic Christian to death over a personal feud, officials said Monday, stoking anger among Christians amid a spike in assaults on their community. Bishop Macarious of the southern Minya governorate said the mob attacked the families of two priests with knives and batons in the village of Tahna al-Gabal late Sunday. 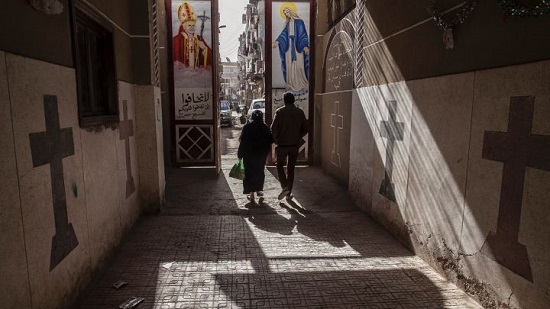 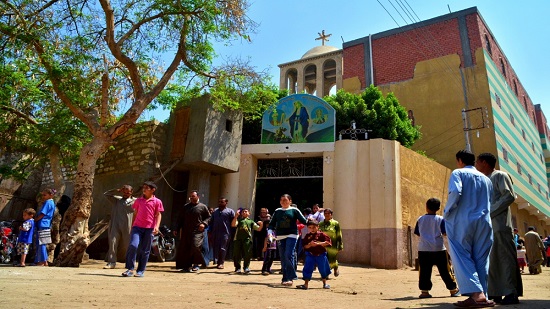 Christians leave after Sunday service at the Al-Galaa Church at Samalout Diocese, in Minya governorate, south of Cairo, May 3, 2015. Copts have long complained of discrimination under successive Egyptian leaders and Sisi's actions suggested he would deliver on promises of being an inclusive president who could unite the country after years of political turmoil.

Strong anti-burqa sentiment in the sleepy Swiss canton of Ticino

On July 1, Switzerland's southernmost canton of Ticino enforced a law banning the wearing of the burqa (traditional Islamic headdress for women) in public places. Described by some as one of the most beautiful and quiet places in Europe, the region on the border of Italy — with the exception of its international film festival — has managed to stay out of Swiss and international headlines. That is, until now. This law has been a long time coming, having been drafted in 2013 following a referendum that resulted in a 65 percent vote to ban the burqa in public places. Earlier than that, even, there were growing tensions between Ticino’s locals and the Muslim immigrants. The Muslim population of Switzerland has rocketed from just 1 percent 35 years ago to about 5 percent now, signaling a fairly abrupt demographic shift. Ticino’s locals are very attached to their culture and want it to remain as it is: a mixture of Italian dolce vita and the exactness and punctuality of the Swiss. Most Swiss cities are now home to prominent Muslim communities, of which some members remain decidedly foreign in lifestyle and appearance decades after their arrival. While European Muslims have managed to successfully blend with the Ticinese identity, Arab, African and Asian Muslims often prefer to stay outsiders and not integrate, continuing in their own cultural routines and customs rather than assimilating. This is obviously a problem for Ticinese locals. Heeding no warnings This is not the first time the Swiss have turned to their beloved ballot box on matters concerning their Muslim community. In November 2009, a referendum was held that resulted in a ban on the construction of minarets; a vote won by a 57.5 percent majority. The most powerful political party in Switzerland right now is the SVP, who belong to the far-right. We are no strangers to European right-wing stances on immigration — has anyone heard of Brexit? Ticino has witnessed the rise of similar local sentiment, in the form of the right-wing party, Lega dei Ticinesi or LdT (the League of the Ticinese People). Led from its founding by bombastic leader, Giuliano Bignasca, who died in 2013, the LdT slowly rose to become one of the two big parties in the canton. Despite pressure from the UN and various European nations not to ban the burqa, the people of the region have spoken in the form of the referendum. It seems that the Ticinese will do things their way, turning a deaf ear to what their neighbors have to say. Although other countries in the EU, such as France and Belgium, have passed similar laws against the burqa, Ticino has received a great deal of backlash from international media, their actions being condemned as “Islamophobic.” Other European countries that have banned the burqa in public places include Italy, Spain, Latvia, Bulgaria and the Netherlands. Two people have already been fined for wearing the burqa in the canton. One was Ms. Nora Illi, a member of the Islamic Central Council of Switzerland, who purposefully opposed the ban. The other was Rachid Nekkaz, a political activist. Mr Nekkaz was fined 200 Swiss francs. Ms Illi faces a fine of between 100 and 10,000 Swiss francs. The Saudi Arabian embassy in Switzerland sent out a notice to Saudi citizens in Switzerland, saying: "The embassy wishes to emphasize that the Ticino cantonal authorities in south eastern Switzerland have announced that as of July 1, 2016 they will start to enforce the burka (niqab) ban in public places in the canton... the embassy reminds all honorable citizens of the necessity to respect and conform to Swiss rules and regulations in order to avoid all problems." Clamp down on conservatism In a move perhaps more in line with the European trend than with the ultra-conservative Saudi kingdom, the Egyptian parliament drafted a new law earlier this year preventing women from wearing the niqab (full-face veil) in government institutions and public places. The law was announced in a statement released by MP Amna Nosseir, professor of comparative jurisprudence at Al-Azhar University. This ban may have been surprising under the rule of ousted Muslim Brotherhood leader Mohamed Morsi, but in light of President Abdel Fattah El Sisi’s crackdown on the Muslim party, it comes as no shock. In February, Cairo University President Gaber Nassar decided to ban nurses and doctors from wearing the niqab in Qasr al-Aini Medical School and its affiliated teaching hospitals. The rule applies to nurses, graduate doctors, specialists, consultants, technical assistants and all academic staff at Qasr al-Aini hospitals. 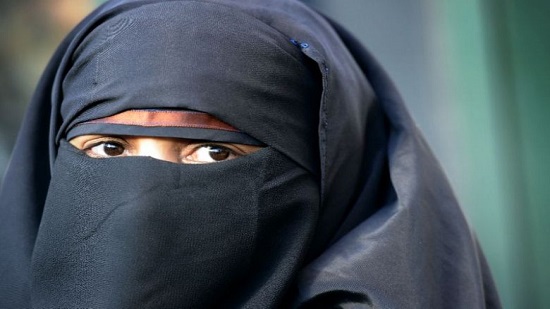 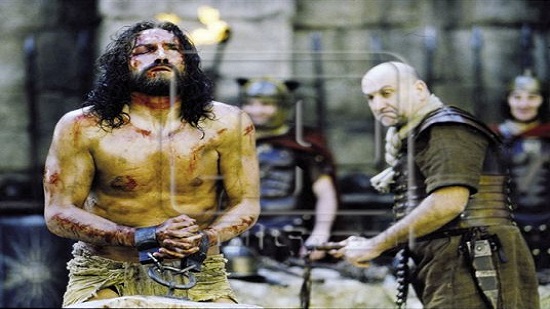 The wheels are in motion for the making of a multi-million dollar, international star-studded Egyptian film about the life of the biblical figure of Jesus Christ, which has spent several years in the pipelines.

Saudi Arabian laws requiring women to have male guardians have been reformed in recent years but continue to restrict and endanger them, obstructing government plans to reform the economy, US-based Human Rights Watch says in a report. 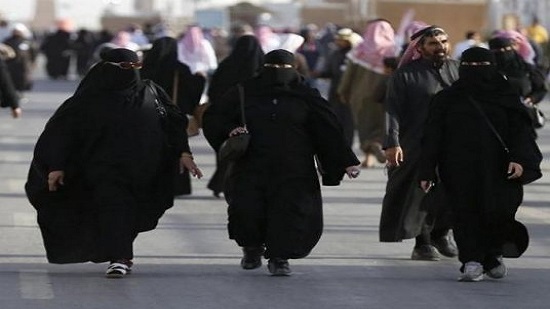 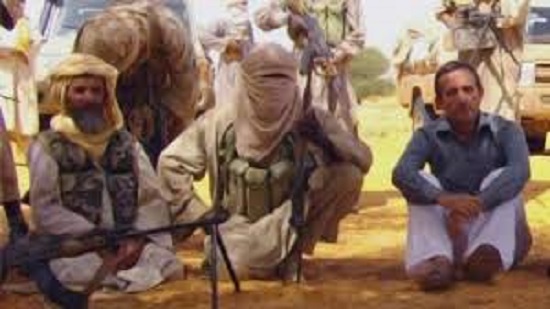 A group that monitors online extremist activity says Al-Qaeda's North Africa branch has reported the death of a commander in Mali.

A Mansoura criminal court on Sunday sentenced five supporters of ousted president Mohamed Morsi to death for killing a judge's son in 2014. 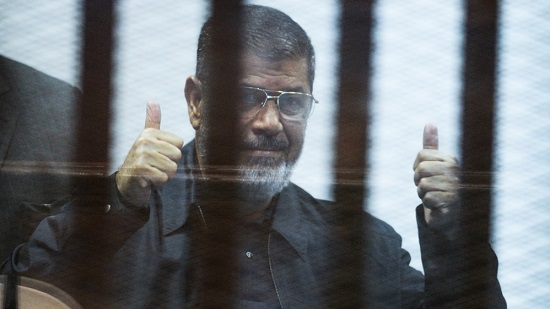 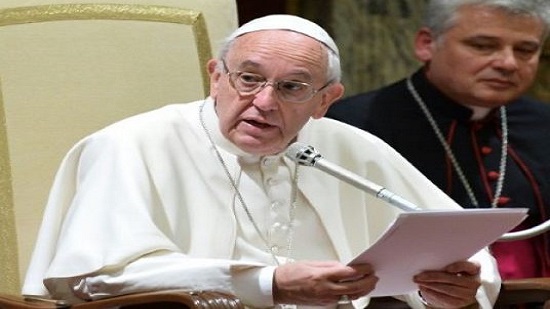 After decades of mistrust, Pope pushes for diplomatic breakthrough with China

Pope Francis is leading a determined push to fundamentally alter the relationship between the Vatican and China, which for decades has been infused with mutual suspicion and acrimony. Interviews with some two dozen Catholic officials and clergy in Hong Kong, Italy and mainland China, as well as sources with ties to the leadership in Beijing, reveal details of an agreement that would fall short of full diplomatic ties but would address key issues at the heart of the bitter divide between the Vatican and Beijing.

Air strikes killed at least 12 civilians including children in two rebel-held neighbourhoods of Syria's Aleppo city on Thursday, the Syrian Observatory for Human Rights said. The Britain-based monitoring group said it was unclear whether the strikes were carried out by Syrian government or Russian warplanes. 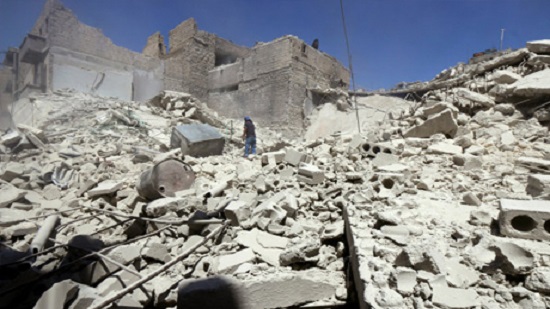 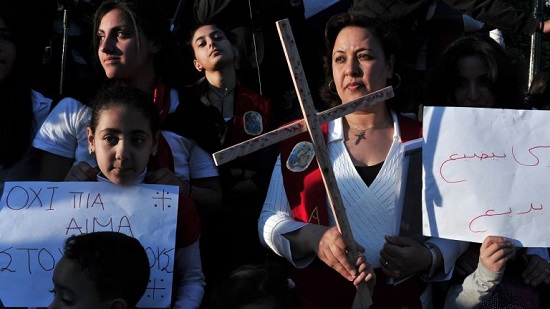 Acourt in Minya ordered Wednesday the release of eight defendants held against the backdrop of a sectarian strife that occurred in the governorate in May, during which an elderly Coptic woman was stripped off her clothes. The group is the last to be released out of a total of 16 defendants. The defendants were released on EGP 10,000 bail each, reported state-run newspaper Al-Ahram. Dozens had looted and torched at least seven homes belonging to Coptic families in the village of El-Karam, according to the Coptic Orthodox Church.

Three army conscripts were killed and another 12 injured by an improvised explosive device (IED) that targeted their armoured vehicle in the North Sinai city of Al-Arish, several residents told Daily News Egypt Wednesday evening on condition of anonymity. 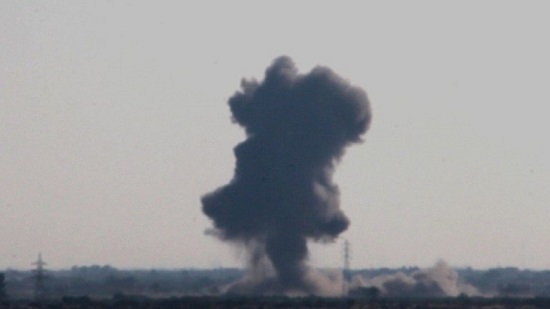 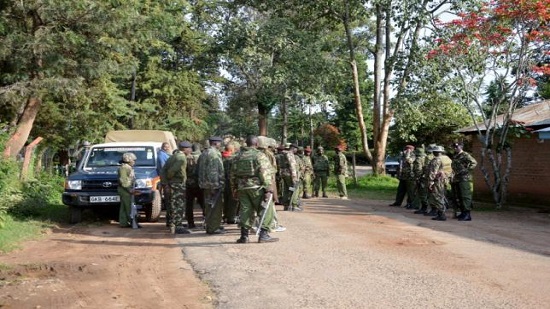 A suspected recruiter for Somalia's al Shabaab militant group being held in a west Kenyan police station shot dead at least four officers there on Thursday after snatching a weapon from a guard, an officer said. The incident took place at Kapenguria police station in a region near the Ugandan border.

Since Islam arrived to Egypt, successive regimes have been trying follow the Pact of Umar 1300 years ago as well as the Hamayouni Decree set by the Ottoman Sultan Abdul Majid I. However those documents contradict with Human Rights and the charters and resolutions of the United Nations General Assembly, the modern governments insist to follow them more than constitution and law. In fact, they give the fanatics a licen