PITTSBURGH – The world's most exclusive club has expanded, pledging big things for the global economy. But it's likely to have just as much trouble delivering on those promises.

Leaders of the Group of 20, at their third summit in less than a year, said the 21st century needed a new way of coordinating the global economy.

The old economic powers — the United States, Japan, Germany, France, Britain, Italy, Canada and relative newcomer Russia — are now joined by fast-growing developing countries such as China, Brazil and India. The cozy club — first the G-7, then the G-8 — had ruled over economic decision-making for the past three decades. 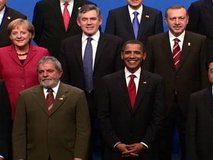 President Barack Obama helped handle the membership negotiations. "We can no longer meet the challenges of the 21st century economy with 20th century approaches," he said. In his radio and Internet address Saturday, he spoke of "an historic agreement to reform the global financial system — to promote responsibility and prevent abuse so that we never face a crisis like this again."

Despite the rhetoric, what the G-20 produced in Pittsburgh looked like what used to come from the G-8 — lofty goals, few specifics.

France and Germany sought tough caps to penalize greedy bankers. The U.S. had objections. The result: a proposal that calls for regulators to better link pay to performance but without any binding caps.

That's disappointing to people angry about a return of big paydays for bankers whose institutions received massive government bailouts only a few months ago.

Then there was the U.S. effort to force countries to follow stronger capital standards. The idea is to help prevent another financial meltdown.

Banks got in trouble last year because they did not have enough capital, the reserves used to cushion against losses from bad loans and other sour investments.

The G-20 did adopt the broad outlines of a tougher approach to capital. But before new rules are written and take effect, expect heavy opposition from banks upset that the rules could cut into their profits.

The list of misses in the G-20's final statement is lengthy. In some areas the best that can be said is that the countries agreed to keep talking about problems debated for years.

Consider the long-running campaign by China and other fast-growing developing countries for a greater say in running institutions such as the International Monetary Fund and the World Bank. The G-20 agreed to move toward equalizing the voting power of developed and developing nations, but left many tough decisions for a later day.

In some cases, the rhetoric did not match reality.

For the third straight meeting, the G-20 promised to resist trade barriers during the current hard times, seeking to avoid the disastrous spiral of tit-for-tat retaliation that deepened the Great Depression during the 1930s.

Yet the track record of the G-20 countries, including the United States, the world's biggest economy, has fallen far short of the promises. The Obama administration recently announced it was penalizing tires imported from China as the president moved to keep a campaign promise to a key labor constituency, despite an angry reaction from Beijing.

Even with all the failings, the G-20 could still offer more promise than the old G-7, if for no other reason than the right people are now at the table. It made no sense to exclude China, now the world's third biggest economy, and Brazil and India.

Russian President Dmitry Medvedev, whose country took years to crack the barriers keeping it out of the G-7, said that no matter how big the ruling group was, it needed to be mindful of those left out.