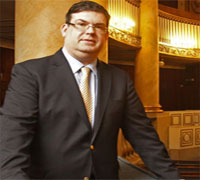 Oskar Deutsch, the President of the Jewish Community in Vienna, said that the number of anti-Semitism incidents in Austria is increasing, and the Jews are being attacked all over Europe.

He added that there are 135 recorded racist attack against Jews in 2012 comparing to 71 in 2011.
This comes as Arabic and Islamic communities are growing in Europe including more and more fanatics who are seeking the Islamization of Europe as well as imposing their ideology, Deutsch added.
Tweet
Pope Shenouda Article