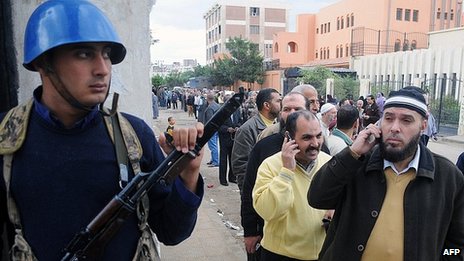 There are two things that, right away, tell you you're in Alexandria; the vast Mediterranean Sea that dominates every aspect of life here and the quintessential black and orange Alexandria taxis.

There is something about Alexandria that draws you in - an openness, cheerfulness and a laid-back attitude that is characteristic of those who live by the coast.
If there is one thing Alexandria has on Cairo it's an "easy-going" lifestyle.
Alexandria is Egypt's second city - Egyptians also call it "the mermaid of the Mediterranean".
This city has acquired various reputations through the years - and one of them is as the stronghold of Islamists in Egypt.
The hard-line Salafis and the Muslim Brotherhood from which President Mohammed Morsi hails have a very strong presence here.
This is the first constitution which guarantees the rights of the Christians and the Jews. Compare it with the previous one, you will see the difference”
Mohamed Soudan, Freedom and Justice Party
That presence manifests itself in so many ways, not least in the latest and deepest division over the referendum on the draft constitution.
This division has led to many demonstrations and many bloody clashes between opponents and supporters of President Morsi and the charter.
The Qae'd Ibrahim Mosques in Mahtet-El-Raml neighbourhood in central Alexandria saw clashes between both sides only a day before the first round of voting.
The violence lasted for more than 10 hours and police and the army tried and failed many times to control the situation.
This mosque - which saw millions of Alexandrians take to the streets around it in January 2011 to topple the Mubarak regime - is now a scene of division and of violence.
Incidentally, the area where the mosque is and where all this violence erupted is also where my cousin and I used to come to on weekends.
The garden close to the mosque was a familiar playground.
We would come to Mahtet-El-Raml on weekends to play, go to the cinema and eat popcorn, grilled corn on the cob - and ice-cream if it was summertime and we were good.
Father Augustinos says Egyptians can overcome their present difficulties
It's really hard to think of that area as a "flashpoint with possible eruption of violence" - a security description of the area now.
"It will not continue," said Father Augustinos, the head priest of the St George and St Anthony Coptic Church.
"It's a critical period in our country but we will pass it," he continued as I sat down with him in the courtyard of the church.
St George and St Anthony Church is one of the oldest and most well known churches in the Muharram Baik area.
It is an area where I went to school and I have so many childhood memories.
It is also an area that has experienced many clashes between Muslims and Christians in recent years.
Many here will tell you that all is well and that Muslims and Christians co-exist peacefully, which in most cases is true.
But you can feel the tension everywhere you go and some say it became worse after the 25 January revolution.
"We thought we would move forward and build the country but what has happened? It's become worse. You only have to walk 100 metres and you will see it," Mirret, a pharmacist and churchgoer tells me.
Michael, another member of the church, says that after taking to the streets in Alexandria to topple the Mubarak regime, he now questions whether it was all worth it.
"I can easily say I regret what I did. Since the revolution there have been many incidents. One comment can lead to violence; you can't relax on the streets."
I ask Father Augustinos about the draft constitution to which he voted "No" and what would worry him the most if it passed.
"I think we will pass a hard period for the church, there's no safety for us," he said.
But Mohamed Soudan, the foreign relations secretary for the Freedom and Justice Party - the Muslim Brotherhood's political wing - disagrees.
"This is the first constitution which guarantees the rights of the Christians and the Jews," he says.
"Compare it with the previous one, you will see the difference.
"Besides, the Coptic church has agreed on most of the articles before they withdrew from the constituent assembly," he added.
Alexandrian hip-hop group Revolution Records say they do not fear the Islamists
Among many concerns that opponents to this draft constitution have are the articles related to freedom of expression and state control over media, arts and sciences.
I put this to an Alexandrian hip-hop group called Revolution Records.
They have gained much popularity in the city since the revolution.
Their most successful song, Kazeboon (Liars), is against the military rule imposed when the Supreme Council for the Armed Forces (Scaf) took control after the Mubarak regime fell.
I asked them if they were worried about the Islamist presence in Alexandria and the draft constitution that they did not agree with.
"We weren't afraid of the army so we are not afraid of the Islamists," Mohamed "Temraz", one of the group members said.
"We can't be afraid. After the revolution no-one can stop us," he added.
His colleague Ahmed "Rock" then said: "Look, Alexandria has many Islamists, yes. But it also has many revolutionaries. We will not stop."
Tweet
Pope Shenouda Article