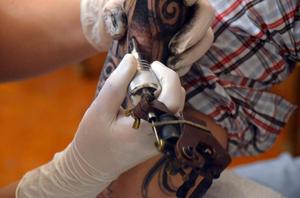 Tattoos have a long and colourful history in Egypt; from Bedouin symbols to the familiar Coptic cross, getting inked is certainly not new to Egyptians. The trend is becoming popular in Cairo’s upper-class neighbourhoods, where the urban elite can choose what permanent art they want on their bodies.

Tattoo parlours have a difficult time operating on a visible level and the legal status for a modern tattoo parlour is ambiguous at best.
Deviant Subkulture is a tattoo parlour in Zamalek which says it operates, just like all other parlours, from the underground scene. “We have been open for two months but we have had a great reception,” said Tamer (not his real name), the founder of Deviant Subkulture.
Despite the personal risk, Tamer says there are reasons why artists and owners alike will continue operating a business venture with an unclear legal standing. “There is of course the motivation of profit, but there are more personal reasons like passion for the art.
There are many ways for people to rebel. There are protests and then there is personal liberty and culture. One way to speak out is to go against the current trend,” he said. “If we do not have tattoos, then it is all over. If we do not have the freedom to express ourselves using our own bodies, everything is gone.”
Many clients share Tamer’s symbolic view of tattoos as indicative of freedom and he says sawry or revolutionary tattoos are among the most popular. “Our most popular tattoos have been the smaller ones, sometimes those that can be hidden under clothes, but we have noticed people are getting bolder and bolder. Many people like revolutionary art and Arabic calligraphy.”
Tamer says most of the artists learn the craft abroad. “This is also where the equipment comes from. Our services are not cheap and that tends to define the majority of our clients, more than a specific demographic,” Tamer said.
Despite the long history of tattoos, Deviant Subkulture is aware that there is a new trend, especially since the revolution, of tattoo parlours in Egypt. “The tattoo scene in Egypt is a new trend,” said Tamer, “and we have a few places around Cairo of varying quality and artists.”
When asked about the presentation of his parlour and the name he chose, Tamer said, “we cater to a mostly liberal class of people who have only just begun to explore, and it shows in the image we espouse on our Facebook group.”
Despite the instability of the political situation, Tamer is optimistic about the future of the scene in Egypt and has ambitious plans for Deviant Subkulture. “Our goal is to have international artists come here to the parlour to work. Unless the political situation changes in some way, we hope for sustainability.”
Tweet
Pope Shenouda Article