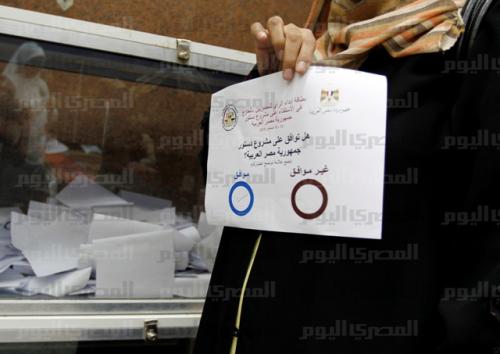 "Arabs Without Borders" association issued a report today about the violations and falsification encountered the constitution draft’s referendum by Muslim Brotherhood and their supporters in various governorates.
It showed that MB members have tried to mobilize the people to vote “Yes” in the referendum. MB has offered buses to carry the people to the voting committees as long as they are to vote “Yes”.
Electoral bribes such as food substances, blankets and money were offered to the people in order to vote “Yes” in the referendum by Muslim Brotherhood and Salafis.
Judge Mohammed Motawee, committee supervisor, has mobilized the voters in his committee to vote “Yes”, in addition to many Islamists (bearded men and veiled women) in various committees who tried to mobilize the people to vote “Yes”.
A man belongs to Freedom and Justice Party of Muslim Brotherhood was arrested with a machine gun and dozens of bullets. Moreover, a group of armed people have broken into an electoral committee and forced the judge as well as the voters out of it, with no action taken by police or the army.
A voter was beaten and arrested after he had asked the judge supervising the electoral committee to show his ID in order to make sure he is a judge!
An employee in the Administrative Prosecution claimed to be a judge, and the police was reported.
It’s worth mentioning that a random questionnaire was performed by the association, which showed 88% would vote “No” and 12% would vote “Yes”.
Tweet
Author